Holy crap!!!  It's been a over half a year since I've posted.  Time has absolutely flown.

A little bit of catchup.  Work has been really busy - I was sent to France for a week to work on a documentary (an absolute once-in-a-lifetime trip), been working hard as we have launched a new soccer team in our city (and a new league for that matter) and at times feels like I now have two jobs (or maybe twice the work).

My niece and nephew are getting older, more independent, but I still try and keep them in the mix.  Was asked to be on the Board for a group that I volunteer with (amazing people and a great cause that I'm thrilled to give my time to).  And.....I'm trying to complete a documentary project of my own that I really am excited about.

Oh.....and I try to still be somewhat involved in the sports card hobby.

Been to fewer shows this year, and have definitely bought way less than usual (I think I've made 2 eBay purchases this calendar year so far) but I still search out Linden stuff everyday and am always excited to see what all is out there and what people are picking up.

Was at the big Summit Show in Edmonton a couple months back and snagged a couple cards.  I'll share one with you now (as I feel the need to post a photo). 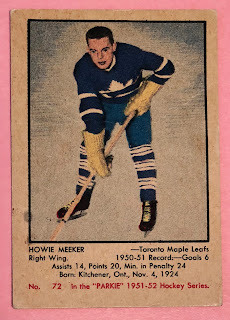 This Meeker rookie card is in pretty sweet shape.  Yeah there are a couple splotches on it....but for the price, it was a steal.

I'm excited to add another card to the Parkie Project as it's been a while.  Heck, everything has "been a while" lately.

Definitely not abandoning the blog.....just life getting in the way of things.  And I'll be honest, there just hasn't been as much for me to share at this time.  But like many things, there are ebbs and flows.  Things'll pick up.

Hope everyone has been enjoying their year!!
Posted by bamlinden at 6:15 PM