LINDEN CARD(s) OF THE WEEK - Some Big Summer Adds

What would a summer of collecting be without a few new Trevor Linden cards for the collection?  And I would hate to disappoint you all.  :)

In all honesty, it has been a fairly quiet chase these past few months (the last month or two have been a little more active) and that's due to my decision to limit my purchases this year, my lack of interest in most of the new stuff that's been coming out and the crazy prices some people still put on their cards (I'm way more picky about what I'll pay....and I'm proud to say that).

But every so often a card would pop up that would just make the hair on the back of my neck spring up, my ears perk and the trigger finger would get itchy.  I still like that a good card gets me going.

So let's start off with a bang. 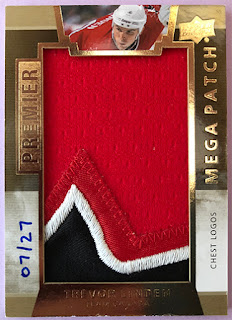 BANG!!  These mega patch cards are one of my favourite chases in the past decade easily.  I love that UD used a Team Canada crest and the way they perfectly piece together shows the care and attention to detail in what the mega patch vision is.

This is my eighth piece of the gigantic puzzle and I'm happy to add any new piece to the collection.  I have also seen another six cards pop up (and I have scans) so we are now officially past the halfway point in seeing these cards out in the open.

I'd love to one day have scans of all 27 pieces of the crest - and hopefully own most of them, but one needs to be realistic.  It's fun to find a new number pop up and I'll leave it at that. 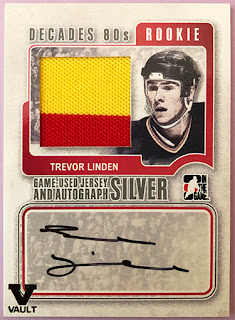 Alright......I CAVED!!!  Ever since In The Game released their Vault cards I have been a big Debbie Downer when it comes to them.

No checklist, oversaturation of the market, money grab, people wanting obscene amounts for simple jersey cards.  Blah, blah, blah.  Most of the Linden cards offered up in the Vault series left me with less than zero interest in chasing them all down (I've now counted eighty-five unique Linden Vault cards........85!!!!!).  It's just a mess of a product.

That is until I saw this Rookie Game Used Jersey/Auto card.  Damn if it's not just a real nice card.  And the price was more than fair on it.  Add to that, it was being sold by a guy who has a bunch of nice Linden cards.  I needed an in to learn more about what he has to offer.

I'm happy with my purchase........and I'm wavering on the whole Vault thing now.  Maybe I'll snag the odd one or two - if it's a card that excites me and the price is right. 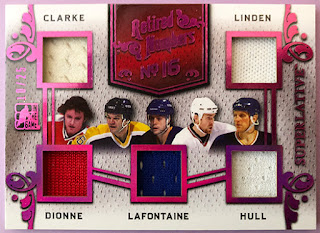 This last card was a nice surprise gift from another local collector.  I see him at the local shows and during trade night and he knows full on that I am interested in anything Linden.  He's always keeping an eye out for me and I really appreciate that.

This is a card that, while he likes it, knows that I would appreciate it a whole lot more.  Thanks Baron for the fantastic add to the ever growing Linden collection.