One of the more unique Linden items I've picked up this past year (heck.....this past decade) had me both chuckling and impressed when I cracked it out of the bubble mailer.

It's got to be the right set of circumstances for me to take a flyer on a non-card item.  I've got plenty of yearbooks, posters, programs, oddball stuff, shirts, pucks and now.... 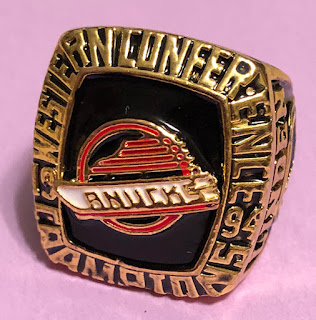 Look at this beauty!!

I've seen this ring show up on eBay a number of times but there was one auction this summer that had me pay particular attention.

Normally, the asking price for this ring has been in the $40...$60...$80 range - and that's US dollars!  Far more than I'm willing to pay.  The auction I was interested in had a starting bid of $0.99 cents.  Let's see just what the desirability of this item would be.

A week later when the auction was almost up, there was still no action.  I was plenty happy to toss a mercy bid on the ring....it would be a good laugh.  I decided to set my maximum to just over three bucks.  Good thing since there was someone else who was thinking the same thing.

But when it arrived, I was plenty happy. 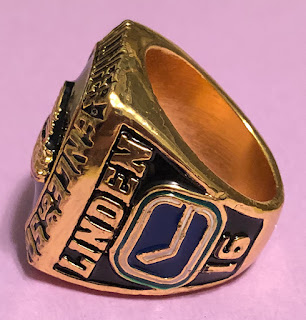 Quite honestly, if it didn't have the Linden component to it, I never would've even paid attention to it.

I was surprised that the ring had as much weight to it as it does.  I was expecting some cheap Cracker Jack-style prize ring but this had some beef.

And while this won't rival some of the amazing championship rings out there (even those replica ones) this was a pretty sweet snag for the price. 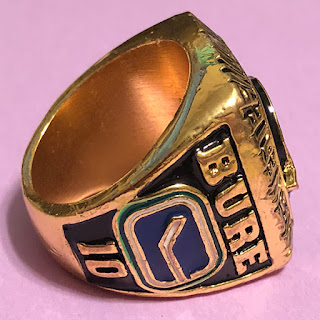 Pavel Bure sits on the other side (I would've preferred Kirk McLean...but I'm not complaining) and I quite like the simplicity that the ring has.

It's a great reminder of what has been the greatest Stanley Cup Finals series I've ever seen.....and I can say that even though the Canucks didn't take home the Cup. 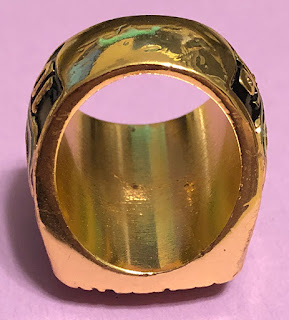 What's even funnier is that when I bought the ring, I didn't even care what size it was.  I didn't really have any intention of wearing it.  But wouldn't you know it.....it's certainly wearable.

Not sure how long I'd want to wear it though....could make the finger turn green.  Ha ha. 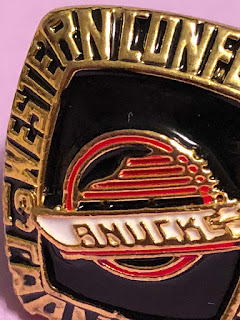 One last look at the detail in the logo and some of the lettering.  Again, nothing to write home about, but it's pretty darn good if I do say so myself.  I've seen some crap knock-off jerseys that couldn't get things looking right if their lives depended on it.  This actually looks somewhat legit.

Alright....I almost laughed at that one.  It's worth exactly the price I paid for it.

Happy to land it.  It'll be a fun item to show off.  But that's about that.


Now....to summon the power of the Mighty Hercules!!!

Posted by bamlinden at 4:25 PM