BEHIND THE MASKS - The Ups & Downs Of Intimidation Nation

Heads up everyone…I’m on a roll.

Goalie mask sets have been pretty much off the production plate for about the past 5 years. The most recent set to be released (that was on my radar) was 2017-18 Leaf Masked Men....and it was quite underwhelming. Not the greatest checklist and some of the masks were altered in order to align with proper copyright and usage agreements.

Still, I chased the set. Built it with ease as many of the cards weren't overly desirable. What's the saying..."One man's trash is another man's treasure." OK, the cards aren't trash...but you get my drift.

This year, Upper Deck returned to the mask inserts table by pushing out a 32-card release in the Skybox Metal Universe product. Upon first hearing of this, I was quite excited. I was still pumped to build the set when I saw the first couple of cards, but slowly, the rollercoaster ride of this set started to reveal itself. 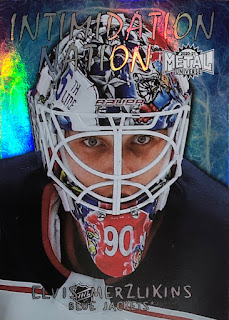 I really appreciate that UD put actual player shots on these Intimidation Nation cards. A lot of the photos are very crisp (unlike some of the past mask sets where the image was pushed just a little too much...creating some blurriness). There have been too many products that have come out where the image is just a floating mask. To me, there's no reason why you shouldn't show an actual player wearing the actual mask these days. If you can't....don't make the set.

I like the 'sheen' that the card gives off in the light. It's not a full-on glossy vibe, but I like how the background catches when you tilt the card.

It's a great checklist with most of the 'A' goalies in the league featured. 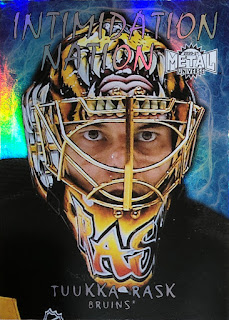 BUT...I can't stand how Upper Deck slapped the 'Intimidation Nation' title smack dab on the crown of the mask. It completely destroys the design appreciation of the goalie's lid. I really was disappointed by this. 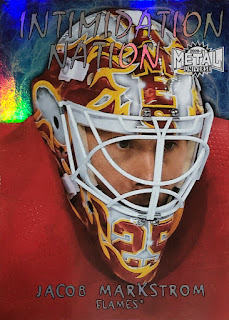 But...these cards were pretty reasonably priced on the secondary market. Normally, new mask cards would be on my radar once they dipped below five bucks apiece. I was surprised to see them go for a buck or two at a local card show a couple months back. I snatched up all that I could.

I somewhat regret that decision now. 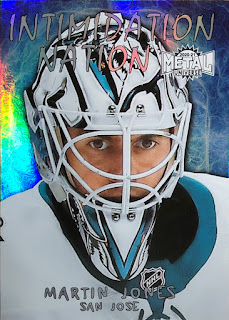 I went on COMC before the end of the year and picked up a handful to continue my chase to build the set. At $2-3 per card, I thought I was doing pretty good.

I was made aware that Skybox Metal Universe was placed on Upper Deck's ePack platform (digital cards) and apparently that has created a massive influx on these inserts on COMC. To the point that the cards have plummeted in price. 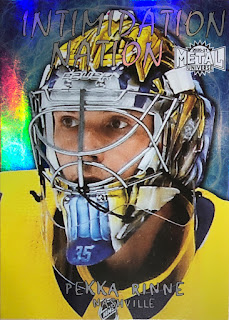 Cards that were $2-$5 before Christmas are now sitting for as low as 0.35 cents - and there are dozens of copies available.

As soon as I found out, I hopped on the site and picked up the remaining cards to finish my set (I'll never see them for that price at the local shows). I didn't know if I should laugh or cry.

I'm still not sure how exactly the bottom fell out of these cards - I think it has to do with the ease that these digital cards on ePack can be moved over to COMC...and so everyone is doing it.

Regardless, if you are looking for a good, fun goalie mask set build that's cheap (knowing that the masks are covered by words), then head on over to COMC and build away. You could probably build the 32-card set for under ten bucks.