Big card show day in the city today and I was excited to find some time in my hectic schedule to head on down to see if I could find any treasures.

I absolutely love card shows. There's something special about seeing the cards in person, talking shop with the vendors and other collectors and scouring through monster boxes looking to unearth that one card that'll make your day. I've been supporting the shows here in town for over 25 years and will continue to do so. It's an important part of the hobby for me.

While I didn't track down any new Linden cards, I did have a great conversation with another player collector who mentioned a card I've not thought about in a long time.

He said he had seen a post on Instagram about a set of caricature cards that had stumped him for info. I knew the exact card he was talking about. When he showed me the photo, I told him that I had indeed found myself a copy of the card years ago. 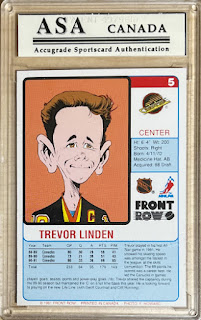 I can still remember seeing this card on the shelf at Collector's Paradise and thinking to myself "What in the world is this card?". By this point in my Linden collecting, I had a pretty good bead on what was out there - or so I thought. I had never seen this card, heard about this brand or noticed it on any checklists or catalogs.

I've learned since that this is a prototype card that was developed with the plans to build an entire set. For some reason, that never came to fruition. But these promo cards did find their way into the market.

Again, I had never seen one before...yet this shop had two of them - and graded at that.

I snagged the one without hesitation. In hindsight, I should have grabbed them both (I've never seen another copy of one since).

When I checked out the IG post this afternoon, it showed the backs of all 7 cards that were made (Gretzky, Lemieux, Hull, Yzerman, Linden, Belfour and Lindros). Pretty good company for my guy if I do say so. The interesting thing is that the Lindros card has his caricature in a Nordiques jersey. In the comments, people were asking to see the front...so here it is... 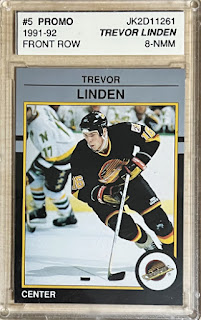 There's nothing radically amazing about the card. I like the action shot photo that was used and think it was a clean design for the time (remember, this was when sets like Score, Pro Set, etc. were the rage...cards were booming).

What I really do like about this card is that it takes me back to a very vivid place and time in my collecting - even now. That's a special card in my opinion.

One neat thing I learned about this promo set...apparently the drawings were done by Todd MacFarlane (yes...THAT Todd MacFarlane). I couldn't find any info to confirm it, but if true, would be yet another cool aspect of this card.

So while I didn't pick up any new Linden pieces at the show today, I did end up with a fun post and a great memory.