This is it, the pinnacle, my number one.

This is the card that put my Linden collection into the status of 'elite' (in my eyes anyways). 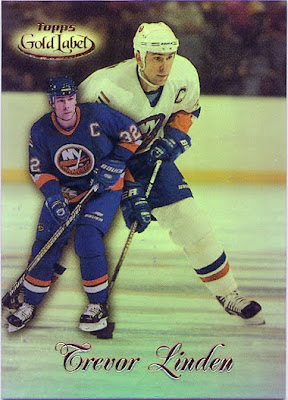 I purchased it about 8-9 years ago from a place called Dave & Adam's Card World. They had an ad in a trade magazine listing cards for sale. I couldn't believe when I saw the listing for this Linden. I had never even seen a Linden 1/1 before.

After a short debate with my bank account (which I won), I decided to snag the card. Years later, I consider it one of the best purchases for my collection.

High end Linden cards frequently go for 2-3 times what I paid for my 1/1, and I know without a doubt I could get my money back and more should I decide to sell - which will be never! 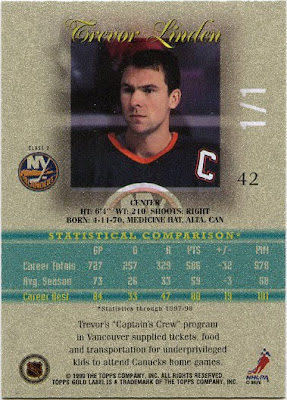 Here's the back of the card should any of you doubt my actually having the card (the front looks identical to the regular card).

I remember when this set came out. Beforehand, I had the goal of getting one of every card Trevor had - which I considered a possibility. The Topps Gold Label set has 3 'classes' of cards (you'll note the class on the back above the team logo. Within each class is 3 versions (regular, black and red), each with tougher odds in getting the card.

So that's 9 cards in the Topps Gold Label set right - wrong! Each of the 9 versions has a corresponding 1/1.

I soon realized I would never have one of each card. But I decided that as long as I have one of his 1/1 cards, that would put me in "the club".

I have since acquired another 1/1 card and I'm thrilled to have both. I know a couple other linden collectors with more 1/1's, but I feel I can hang out with them.

I know I have at least one card that they don't have.
Posted by bamlinden at 8:20 AM