One more new set for me this week (I promise to change things up soon, maybe a vintage set or something).

This week I go with a 'low end' set, one that is on the more inexpensive side. 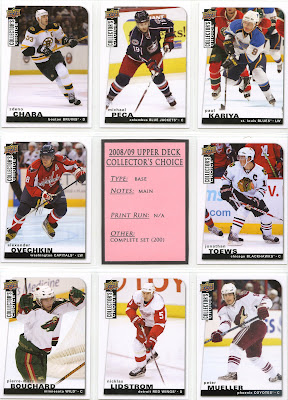 2008/09 Upper Deck Collector's Choice
This set is a simple 200 cards that Upper Deck puts out mainly to attract the kids, new collectors and collector's wanting to not break the bank. These types of sets take me back to the 80's when collecting cards were all about fun, trading and the quest to complete the set. 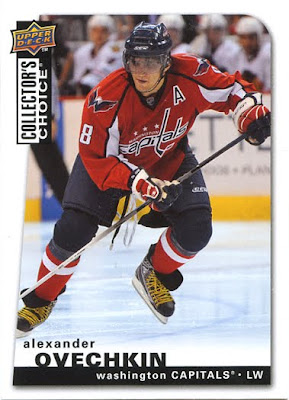 The front of the card is a super simple design. Not always a bad thing, but I think UD could have spiced things up a little bit more. The Collector's Choice logo in the upper left corner is a staple for this set through the years and makes the card instantly recognizable.

The card front is taken up mostly by a photo of the player - nothing fancy, nothing special. That said, it's a great opportunity to enjoy and appreciate the palyer on a traditional trading card.

The subtle shape of the player box (rounded upper right corner and an angled left side) are about as "fancy as UD get with this one. A little dropshadow along the shape adds a nice touch. It works for me.

The one down side is that a number of the player photos look a little washed out. The photos are not as crisp as I'd like to see. Some are quite nice (like the Kariya) while some are not (like the Bouchard). It bugs me because I know these things can be improved on. A couple minutes to tweak the photo and it's done.

The name, team and position are along the bottom of the card and again is a simple text font. Nothing fancy. 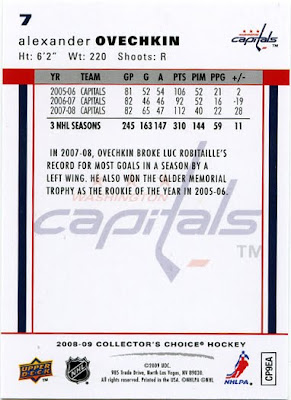 The back of the card has a real nice feel to it. The card number, name, stats, team logo, everything is well laid out. Simple and yet effective. Full stats - nice!

This card back shows that simple is sometimes better. I like it. My only beef would be that with younger players (like the Ovechkin), there is a great deal of wasted space. I can tolerate this because I know that for the vets, I'm going to get complete stats.

Overall, a simple set that doesn't give you 'over the moon' expectations, but would be a fun set to build for literally pennies. I bet this set could be had for less than $5. In fact, I bet if one really wanted to, they could get have the set given to them.

If you've never built a set, this one is for you.