BEHIND THE MASKS - Quest For The Cup Itech Masks

Well, life is back to some semblance of normalcy. All signs of Christmas are packed away for another year, the World Junior tournament has come and gone (and what fantastic hockey it was) and work has beckoned me to return. I hope everyone had a fantastic holiday season.

While it might take me a few weeks to get 'caught up' with my projects, I thought I'd post a nice little set of cards that came in the mail today. 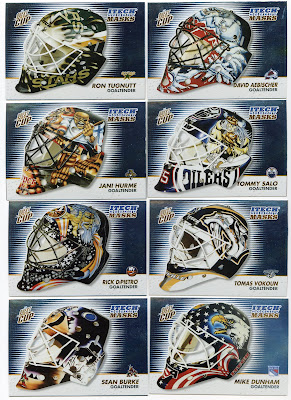 2003 Pacific Quest For The Cup Itech Masks
**set was pulled from release**
This set of cards were ones on my radar big time back in 2003. I was huge into goalie masks and was grabbing anything and everything relating to them.

I had heard that an upcoming Pacific set would be including inserts based on mask designs from a guy named Frank Cipra, an Itech artist and mask maker for the biggest names in the sport.

It was literally at the last minute that Pacific had to pull the cards from the set as there were legal issues with the showing of the mask designs. Even though an artist painted the masks, I believe that the ownership of the designs belonged to the NHL. Regardless of the issue, I was bummed that there would be no mask cards.

A few years later, I saw someone post the Dipietro card saying he picked it up in a trade. I was shocked to see it. A short time later, I noticed someone had the entire set. Probably the only person to own the entire 8-card set. I was in awe.

Fast-forward to December. I saw an ebay auction for one of the cards. And for (what I thought was) a reasonable price. I soon found out that the seller had all 8 cards. Already knee deep in debt with Christmas coming up, I ignored what my conscience was telling me and snatched them up.

They arrived in the mail today and I can honestly say that I am thrilled to have them.

They are slightly larger than regular hockey cards (they barely fit into a plastic top loader and I'm not able to use penny sleeves). They look like proofs (seeing as the seller had a ton of old Pacific proof cards from when they went out of business).

I really don't care. I've got a rare item for my goalie mask collection and I think they look great.
Posted by bamlinden at 10:35 PM