Well, I was talking with a couple of the guys who are up against me in my hockey pool and they are pretty much ready to hand over the winnings. 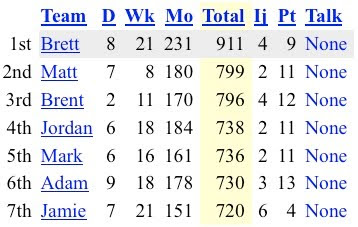 A 112 point lead is all but insurmountable. Add to the fact that I've had the best January so far (by almost 50 points), it looks like there's no slowing down for me.

I would need a catastrophic bout of injuries - and even then it might be too late.

Martin Brodeur has been all-world in this pool. He's the leading point getter with 87 while Daniel Sedin (who was picked by the guy in last) has 78. The guy in third has 71 points. It's Ryan Miller who's my second goalie.

None of my forwards have been "lights out" this year, but I've been getting very consistent, solid outings night in and night out.

he injury bug is not nearly as big of a factor and like I said, I would need multiple season-ending injuries just to make it close.

I love hockey pools.
Posted by bamlinden at 7:04 AM