Now I don't normally "bust boxes" or "crack wax", but this past weekend when I was at the local card store to pick up some supplies, I decided to purchase a sale box just for kicks. 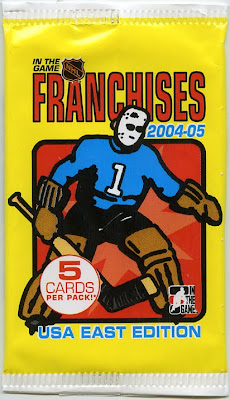 2004/05 In The Game
Franchises USA East Edition
I really liked the idea of this set when it came out 5 years ago. It's a retro-themed card highlighting the teams and players of that region (in this case the USA East) from days gone by all the way up to today.

There were two previous Franchises releases - Canadian Edition and USA West Edition and each were a 150-card-set. With this set being the third, the cards are from 301-450.

It's a great trip down memory lane both in card design and player selection. 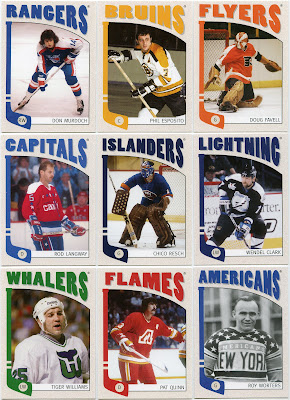 This box contained 24 packs with 5 cards a pack. I landed 117 of the 150 base cards which is not bad (I would have liked to have been a little closer to set completion, but I guess it is to motivate people to go out and search down the remaining few). I got no doubles - so no trading of extras.

Like I said, the card design is retro-themed. I like the idea, but the design just isn't quite there for me. It looks like a mediocre attempt at a retro series.

The player selection is cool, with some players I have never heard of. Other players are shown in some rare uniforms (like Jacques Plante as a Bruin, Tiger Williams as a Whaler and Wendel Clark as a Lightning....that sounded weird). 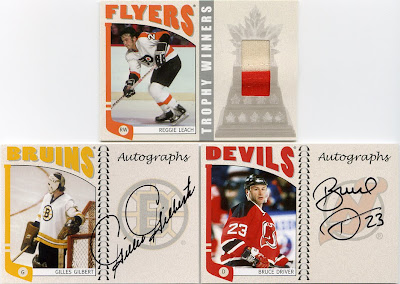 There are no non-memorabilia insert cards in the set (though I did get an oversized box-topper card....so I guess that would count. It was an Atlanta Thrashers team card) and instead, there are autos and memorabilia cards inserted in.

There are also various versions of these cards that are more rare in numbers.

The Reggie Leach memorabilia card is really nice. It's a thick seam that is busting through the card. I quite like it.

The autographs though are what really sold me on this box. No stickers here. The players sign the card and there is tons of space for them to sign (although Gilles Gilbert needed to angle it....and by the way - love the penmanship!). I like the idea of an autograph book for a card design and I bet building the auto set would look really nice when completed.

You definitely won't see this player selection in any other release, so it may not be for everyone's liking. But I really enjoyed this trip down memory lane.

I'll have to keep my eye out for the Canadian Edition down the road.
Posted by bamlinden at 10:54 PM