This week's Linden card has an Olympic flavor (as have a few of my posts recently). It was one card that I wasn't sure if it would ever be a part of my collection.

I guess first off, Trevor Linden was an outside shot at making the Olympic team to begin with. And if it wasn't for Rob Zamuner, Linden would be the guy everyone would be saying "Why him?". Linden was at a turning point in his career. Dwindling numbers in Vancouver, losing the captaincy to Mark Messier, being in the Mike Keenan doghouse and ultimately being traded to the New York Islanders. Trevor had a very strained few years in the late 90's.

All of that was lifted for a few weeks when he was named to the Canadian Olympic team in 1998. Gretzky's one and only attempt at Olympic gold (as a player). 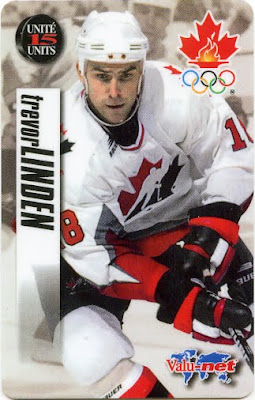 There were 3 types of cards you could buy, the $5 version (which are the most available cards out there), the $15 version (shown above) and I believe it was a $25 card (which I have never seen).

Now I'm not sure on the situation (as there is pretty much no information on the cards), but I think these sets were never released or only the $5 version made its way out to the public. The $15 and $25 versions never saw the light of day from a consumer's point of view.

I had seen the $15 versions pop up on ebay but it was at a 'once in a blue moon' frequency. The first few that came up went for good money. I kept patient thinking that eventually I would out-wait the demand.

Unfortunately, the supply seemed to dry up first. A number of months had passed by before another one of these cards popped up for sale. I was pretty pumped up to see it and made the decision to go after it.

I paid a little more than I wanted to for it, but I'm glad I got it. In the years since, I have seen next to none of these come up for sale and it seems like the well is pretty much dry these days.

I would be interested to find out if the third version was ever released (or even printed for that matter) as I would love to complete the trifecta.

For now, this card remains one of the more unique additions to my collection.

As a post-script, Linden held his own on the Olympic team. Even scoring the biggest goal for the Canadians that year. His tally tied the game up in the dying seconds against the Czechs (only to lose out in the infamous shootout). Linden's reaction to the goal (and bearhug from Brendan Shanahan) is a memory etched in my brain forever.
Posted by bamlinden at 3:15 PM