LINDEN CARD OF THE WEEK? - Or to the bike spokes!

Well, I was trying to pick a card for my Linden "Card of the Week" and thought that I'd dip into something from a ways back.

There are a ton of cards to choose from and a lot of them I really like. I was finding it a tough chore. That is until I hit this card... 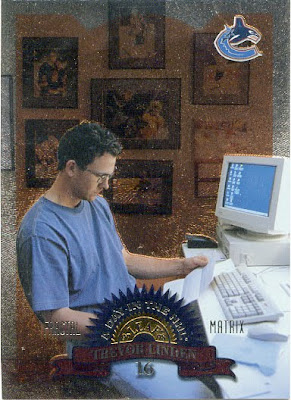 As soon as I saw it - I knew it would be the next card to make the grade...or would it?

This card comes from the 1997/98 set that Leaf released. They did a 10-card subset called "A Day In The Life". It focused only on Trevor Linden and showed him at various stages of the day - his routines, etc. I thought it was really cool that Linden would be the one chosen for this subset.

The photos however tell another story.

I don't know about you, but a hockey card with a photo of a player at the computer reading a letter isn't what I had in mind for a "must have" card. Some of the shots in the set are downright ugly. There's one where he's sitting on a log at the beach just relaxing, one of him on the phone, one of him golfing (ooohhhh, bad memories) and one of him just reading. I guess that is an accurate depiction of what he does, but c'mon...these are hockey cards.

That's 30 of these cards in my collection - and it took quite a while to track them all down.

A proud addition to my collection. Maybe I'll take this double and wedge it into the bike. It's a thicker card so it should make for a great sound.
Posted by bamlinden at 4:00 PM

Labels: Linden Card of the Week, To The Bike Spokes