TO THE BIKE SPOKES!!! - Paul Kariya

There are times in the hobby where companies try to inject some unique feature to "spice things up" in the industry.

There are times though when these innovations create a card that is so undesirable that it makes me say one thing...

TO THE BIKE SPOKES!!! 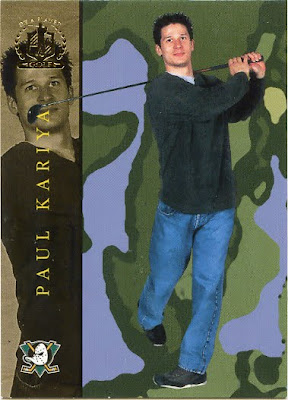 First, let me say that this was an insert set put out by Be A Player. This was one card in a 100 card set. A HUNDRED OF THESE. That's just nasty.

Looking at this card, clearly Paul is posing in some lighted room and I question if he's ever been out on a golf course.

Who wears jeans when they golf - especially if you're an NHLer? What, no golf shoes? Did you leave them at home?

Now I've played a few rounds of golf and I've watched my fair share of it. I gotta say that Paul's follow through on his swing is about as lazy as it gets.

I love the background that he's plunked on. Is that a golf course or a close up of some army fatigues? My 8-year-old nephew could come up with something better than that.

Big beef - using the same pic twice. Gotta love that laziness. And I especially enjoy how the photos are placed so that golf club gives Paul a moustache in the closeup photo. It just looks terrible.

Slap a couple logos on it and call it a day I guess. The back of the card - not much better. This is just an overall swing and a miss.

Did I mention that they made a hundred different ones...A HUNDRED!!

PPHHHHHHHHTTTTTTTTTTTT!!!!!!
Posted by bamlinden at 11:27 AM