This past week, In The Game trading cards released their annual Between The Pipes set. It is one of my favorite sets every year as it focuses strictly on goalies.

This year, the cards look better than ever - and I'm looking forward to buying a box and trying my luck.

I didn't get a chance to go to the card store this weekend to buy a box so I decided to show off a box from the 2006/07 version of the series. 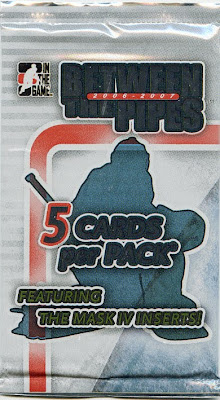 I purchased this box not too long ago as it was on sale at my local card store. The main reason I bought it was because I was building (and am still working on) the Mask IV insert set. You'll see if I made any progress here momentarily.

I'm also a sucker for a bit of a gamble. You never know what you might get in a box of cards.

The base cards in the set focus on the future stars in the game. And while I'm not the biggest fan of collecting junior cards, this set always raises the bar. A nice mixture of future superstars and guys who will be lucky to have a cup of coffee in the bigs.

The Between The Pipes subset are also a part of the base set. What I like about these cards are the nice closeup of the masks (most of 'em anyways....some have just a mug shot). These cards focus on the current players which allow for ITG to get around any sort of issues with showing logos and jerseys.

The Greats Of The Game also count towards base cards and are - you guessed it - the greats. The oldtimers. I love these cards. The ol' fibreglass masks are my faves. 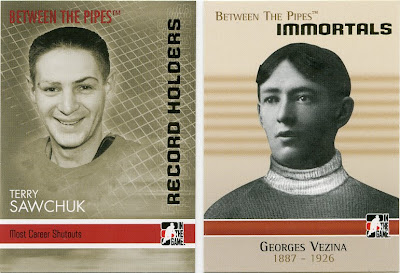 The remainder of the base cards feature a number of subsets. Some I really like, such as the Immortals, and some I'm not the biggest fan of, like the Record Holders (I think the design is a little sub-par versus the rest of the release).

A couple more base card subsets. Lots of variety and some unique and 'outside the box' thinking. I like that. 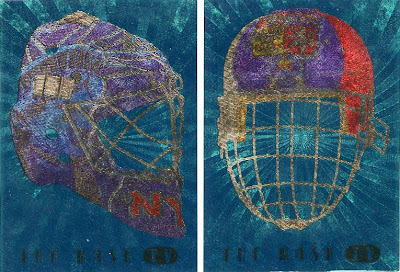 Now we get to the goodies!

I got 2 Mask IV cards in my box. Unfortunately, I already had both of them, but the Hasek International Mask card will make a good trader. By the way, these cards do not scan well at all. They look really slick in person. 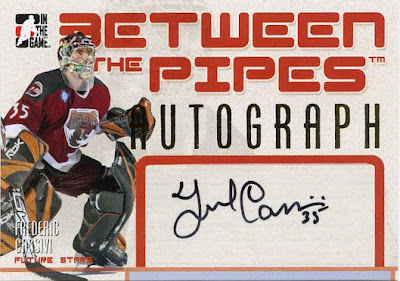 The autograph sets that ITG puts out in their Between he Pipes sets are legendary. A fantastic mix of junior, current and retired players. They are not hard signed autos unfortunately, but I think ITG did a very nice job of masking that fact by incorporating the sticker shape into the card design. 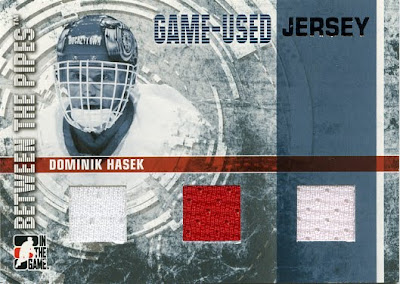 A real nice memorabilia hit here. This Hasek triple is nicer than it looks. Considering that the pieces of jersey come from a Buffalo jersey, a Detroit jersey and an Ottawa jersey. Very nice. 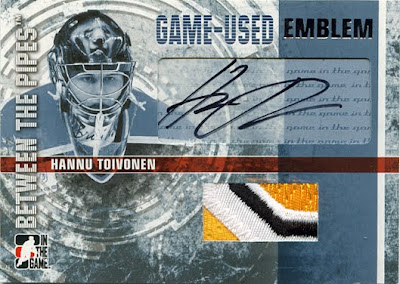 This item though was a complete surprise. I had already hit what I thought were all of my inserts (memorabilia cards came 1 in every 20 packs - and there were 24 packs in the box). This Toivonen would be what is considered a 'case hit'. One of these cards show up in every case. A case is a box of multiple boxes. Not sure how many boxes were in a case this year, but it still made for some long odds.

The card has a gorgeous patch - bursting at the seams. And a nice sloppy signature to finish it off.

Too bad it was Toivonen - but on the upside, there are only 10 of these autograph patch cards, so the rarity in them should make someone's day.

Overall, a really great product for any goalie lover. As nice as the 06/07 release was, I urge everyone to take a look at the current release. Some fantastic stuff from a company that literally has one hand tied behind it's back at all times.

Thanks for the time to take a look. Hope you enjoyed.
Posted by bamlinden at 11:25 PM