Well, the mail today dictated my decision for this week's 'One Sheet, One Set'. An eighth card to finish off a sheet - let's get things going. It's a great autograph insert set - the first one to be included in this project. 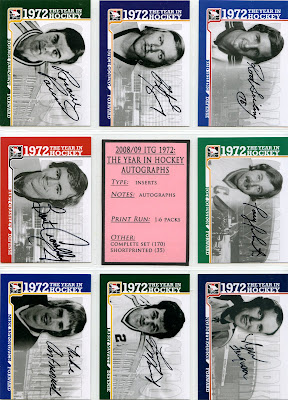 2008/09 In The Game
1972: The Year In Hockey
Autographs
As with the release in general, these autograph inserts were met with high fanfare. A very eclectic mix of players - from Hall Of Famers all the way down to obscurity. Sadly, a few too many guys in the obscure category takes the impressiveness of the set down just a smidge.

It's a 170 card insert set. Which I can only imagine made for quite the task of acquiring all of the signatures (which by the way are all hard-signed on the card. No stickers!). 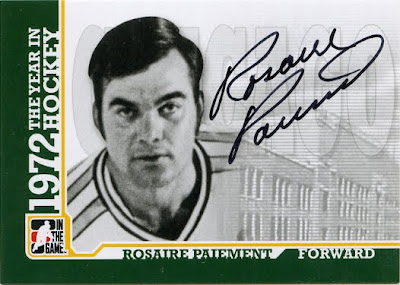 The front of the card is very appealing to me. It's because of the simplicity of the design. Simple design structures were the way back in the 70's and ITG did a great job of capturing that essence.

I also like it because (not to toot my own horn) I feel like it is a card design that I could come up with. I look at the elements of the design and I think to myself - "I could do that".

The background is a combination of the team city and a photo of the arena from that era. It's sometimes tough to read the city name (one of the very few negatives of this set). It's got a scanline effect to create a nice backdrop for the autograph.

The side and bottom border contains a very bold single color. The color choices really give off a 70's feel.

The side text is slight overkill on the set name, but I don't mind it too much. Bold and simple. That said, I would have preferred the team name here.

The player name and position along the bottom really utilize the positive and negative space. A nice simple effect.

The player photo is a simple head shot creating consistency to the set. Some of these pics really show the era it was taken in. Even sans color, they exude the simpler times of the NHL.

As for the autograph itself, a lot of the sigs are really cool to look at. Great penmanship and it looks like the players took their time with the task (except for maybe Butch Goring - he clearly has ahead of his time). 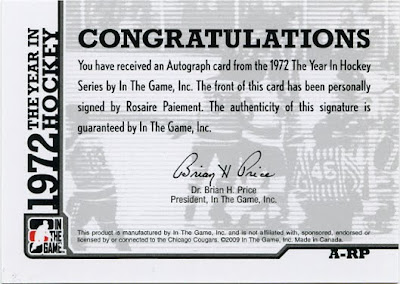 Since this is the first autograph set to be included in this project, the card backs yield to a very different set of conditions and as a result - the critique.

While I can appreciate the explanation of what I have received on the front of the card, I somehow feel jipped.

The design template as a whole really takes from the front of the card. Unfortunately, they use the same background photo on all of the cards. That's a shame since I think they could have switched things up a bit.

The information on the back of the card is nice, but I think they could have used the space a little better. Some stats, or fast fact.....anything.

I guess it keeps a clean look with the card and again, I like that there is some explanation to the card's authenticity.

Overall, this set is a really nice one for those trying to build it. They've got a subset within that celebrates the Summit Series - which means autographs from big names like Henderson and Tretiak.

At 170 cards (35 of them shortprinted), it could take a while. They were inserted one in every six packs. So a box will only get you two or three tops. Some of the unknown guys can be had pretty cheap (a couple bucks) whereas the bigger names could fetch a fair penny.

A solid looking set through and through.