CARDBOARD PHOTOGRAPHY - Through The Glass

Going through some of my old base cards, I came across a subset that I thought would fit this subject perfectly.

Back in the 1996/97 Upper Deck release, there was a 13-card subset called "Through The Glass". It took a closer look at photography in hockey.

The front obviously would show the cool looking photo, while the back of the card would list the photographer as well as his comments about the photo or photo technique.

Here's a sample of the subset (be warned, the cards don't scan that well. The left side and top border have a silver foil "mirror" look that doesn't come across in the scan). 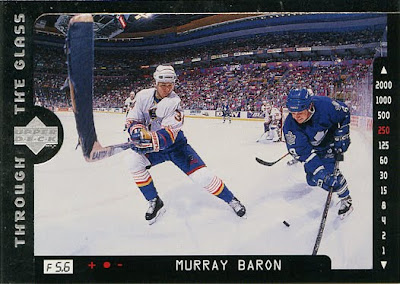 #198 Murray Baron
Photographed by: David Klutho
Card back: "I sometimes use a fish-eye lens to bring myself and the fans closer to the game. Here, Murray Baron's stick seems to be coming at us in a 3-D kind of way. What I enjoy most about shots such as this one is how the rest of the arena seems to move away from us while the subject approaches ever-closer." 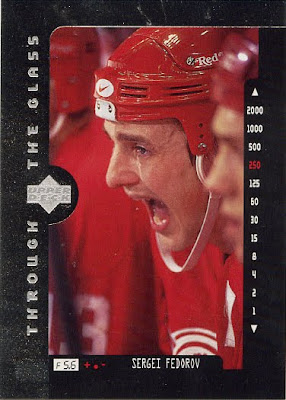 #206 Sergei Fedorov
Photographed by: Robert Beck
Card back: "The subject of hockey action at its best, Sergei Fedorov can even provide unusual photo opportunities when he's sitting on the bench. This shot shows more than Sergei stretching out a jaw that has taken a hit. In his eyes you can see the unrivaled intensity that makes him one of the game's greatest." 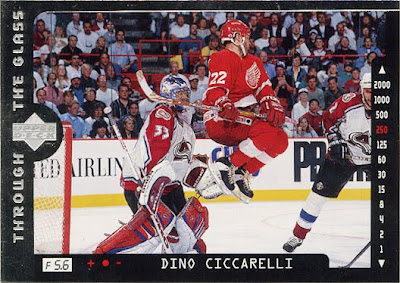 #196 Dino Ciccarelli
Photographed by: David Klutho
Card back: "Every photographer knows that to capture Dino Ciccarelli at his best, the lens has to be pointed at the front of his opponent's net. Dino is the ultimate goalmouth pest, setting up the screen in every way imaginable including jumping in front of Colorado's Patrick Roy." 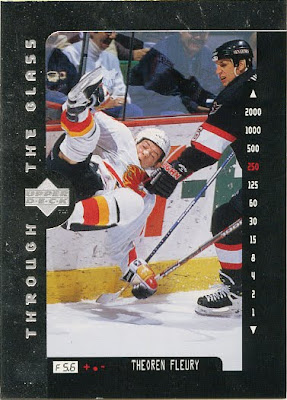 #208 Theoren Fleury
Photographed by: Gerry Thomas
Card back: "The bigger they are, the harder they fall. But in the case of Theo Fleury, the smaller, the more spectacular the fall. Fleury is the type of player that is always making something happen, so defenders have to keep an eye on him. In this case, Chris Dahlquist gives him a little extra." 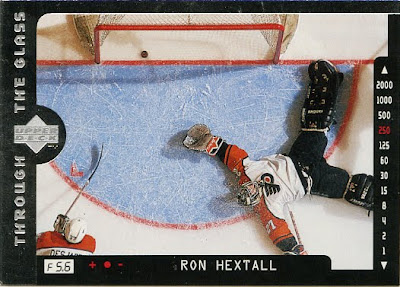 #197 Ron Hextall
Photographed by: Mark Buckner
Card back: "I found that this camera angle in Philadelphia gives me an opportunity to show the game from a unique perspective. This shot is about more than the puck trickling over the goal line. It captures Ron Hextall in one of the rare moments in which he wasn't in control last season. You can almost see his agony through his mask."

It's a pretty neat concept and I wish there would have been more cards in the subset.

Even better, bring the subset back today. I'm sure in the 15 years since these photos were taken, there have been many improvements in sports photography.
Posted by bamlinden at 11:42 PM