Just the one addition today. Found it as I was sorting through base cards. 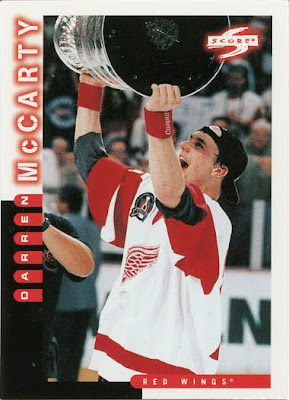 Did you know that Darren McCarty has 4 Stanley Cup rings? I remember one memorable one.

June 7, 1997 he scored a beauty of a goal - the Cup clinching goal - in Game 4 of the Stanley Cup Finals against the Philadelphia Flyers ending the Wings' 42-year Cup drought.


Sweet goal! The photo in the card is from the same game - nice.

Raise the Cup collection - 8 cards
Posted by bamlinden at 12:03 PM