This installment of 'To The Bike Spokes' looks at a card that exposes a brutal mistake in Pinnacle's 94/95 release.

Who dropped the ball on forgetting to shoot St. Louis Blues players.

More importantly, can you guess who this guy is? (I've erased his name obviously) 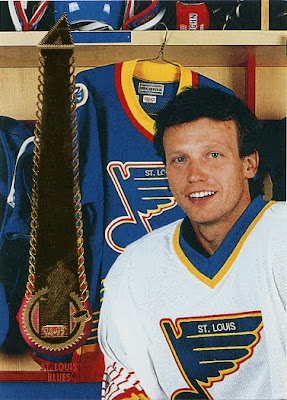 Believe it or not, most (if not all) of the St. Louis Blues cards from that set are posed shots in the locker room.

Are they wanting to showcase how neat and tidy their locker stalls are?

I'll give you a hint on the player... he was a goalie. 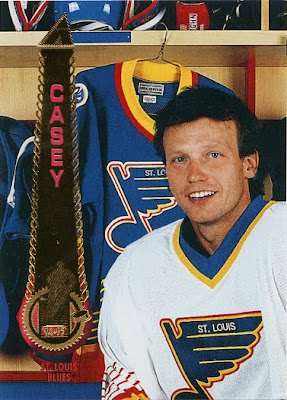 Jon Casey
1994/95 Pinnacle
Wow! Just goes to show you that you put a mask on a player and he can all of the sudden become recognizable.

I bet he doesn't get too many people asking him for his autograph as he walks down the street.

Back to the card for a second.

I find it absolutely unbelievable that Pinnacle didn't have a single shot better than this one for their 94/95 release. Every other team in the league has 'regular' cards in the set, but not the Blues. Nope. Brett Hull, Adam Oates, Al MacInnis and big Jon Casey all had posed portraits.

They look like the good ol' Sears portraits I used to get as a kid once a year at the mall.

What's funnier is that on the back of the card, there is a full head shot - the same pic that is on the front, but against a blue backdrop.

Pinnacle had to Photoshop him into the locker room setting. Hilarious!

I can only imagine being the photographer who was told - "Yeah, can you go get a shot of a Blues' sweater in a stall? No, no player is needed - just the stall. And be sure to use an old wire hanger. "

Jon Casey, it's not your fault.

To the bike spokes!
Posted by bamlinden at 5:41 PM