TO THE BIKE SPOKES!!! - Petr Nedved

In my opinion, any Petr Nedved card should be good to go into the bike spokes.

This flashy forward had a strong junior career after defecting from the former Czechoslovakia during the Mac's Midget tournament in Calgary in 1989.

Drafted by the Canucks (in a stacked first round that included Owen Nolan, Keith Primeau, Mike Ricci and Jaromir Jagr), Nedved showed moments of promise. But inconsistency and lack of passion is what I saw from him most nights.

Juggled later on by the Blues, Rangers and Penguins, Nedved never materialized into the player many touted him for.

That's where we find him at on this card. 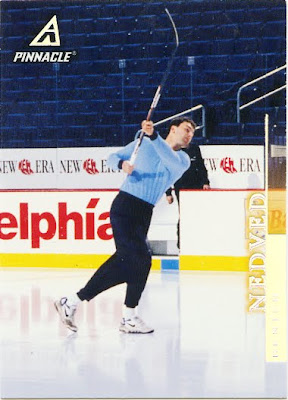 Oh man. Really. This is the best pic you could come up with Pinnacle?

Well, it might just be. Nedved is after all - shooting the puck.

And the long underwear/sweatpants - nice.

Wanna know the best part. Pinnacle liked the "photoshoot" so much, they decided to go with another beauty. 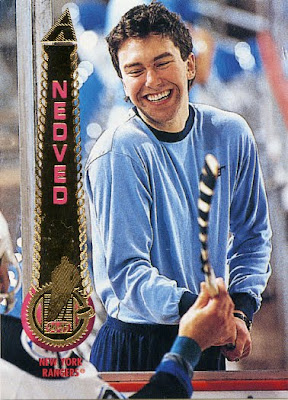 He looks like a seven year old who just got a hockey stick on Christmas morning.

Why? Why do we need these kinds of photos on our hockey cards? There is absolutely no reason for it. Heck, the back of the cards have better photos - IN UNIFORM - I might add.

It's a double for Peter Nedved....

To the bike spokes you go.
Posted by bamlinden at 11:15 PM