As promised, here are the hits from my second box of this year's Between The Pipes.

After cracking open the first box and being really impressed with the results, I splurged and purchased the final box in the store. Good thing or I would have bought a third! 2009/10 In The Game
Between The Pipes
I'm going to pass on scanning any of the base cards. Check out my first box break of the product to get a rundown of what they look like if you'd like.

I will say this. After opening two boxes, I was a little disappointed that I didn't end up with a full base set. 150 cards didn't happen....I came up two cards short.

I've got over half of a second base set (85 cards) along with a handful of triples. Still,it would have been nice to land a full set. Luckily, I am in the process of completing a huge transaction that will land me almost a complete set of the Masked Men II cards. I asked if there was a chance to snag the final two base cards. They're on their way. 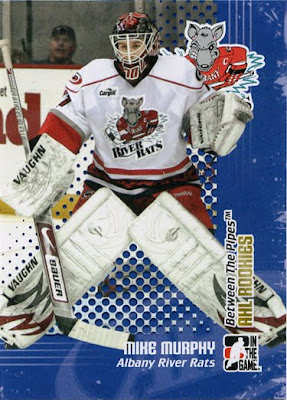 The first insert I hit was one of the AHL Rookies. Meh, it's a nice design, but in all honesty, it doesn't do much for me. No clue who the guy is. No wow factor when I pulled the card. 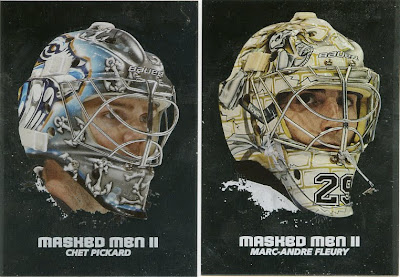 The opposite can be said for these cards though. If you haven't already guessed, this insert set is my favorite. Snagging a couple more for the collection was exciting. 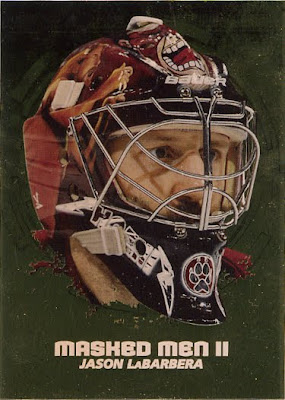 I think there are 30 of each card made. The silver foil looks real slick in person. The gold - awesome!

A couple more autographs to add to the pile. Some young goalies who may or may not make an impact in the NHL. Not bad (but not as nice as the first box). Oh well, the balance will return in my favor soon enough. 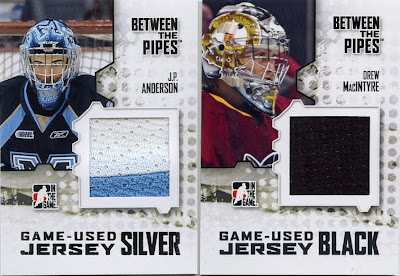 A pair of jersey cards. Again, youngsters. I would have loved to have pulled a more 'name' goalie, but the 2-color jersey on the J.P. Anderson card is really nice (and the stitching is super thick). 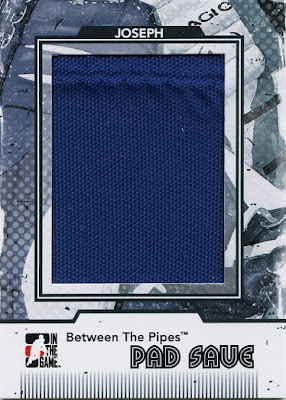 Now we're getting to the good stuff. This Curtis Joseph pad card is quite nice. The stitching is a bonus. This is the black version and is 1 of 60 made.

Now if that was the big hit in the box, I wouldn't have been too disappointed. But when I saw the next card, I was really happy with the results of the box. 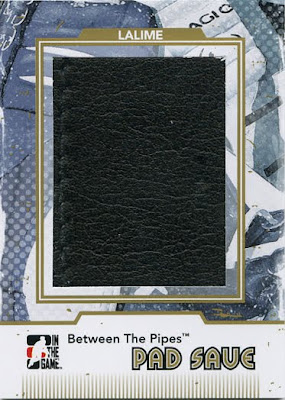 Yes, it's a Patrick Lalime pad card. Whoopie - right? Well, this card just happens to be the gold version and is a 1/1. That's right....the only one in existence. This marks the first time I have ever pulled a 1/1 card (that said, the opportunity hasn't come up very often as I don't break a lot of wax. Plus, there are a lot more 1/1 cards out there to be found. Hey, I gotta stop typing, it's bringing me down!!!).

Now I just need to find a Lalime collector.
Posted by bamlinden at 12:28 AM