TO THE BIKE SPOKES!!! - Troy Mallette

Well, that would mean you would have no idea what he looks like.

That's the problem with this installment of To The Bike Spokes. You tell me which one he is. 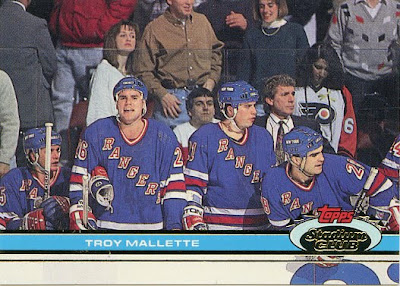 OK, that eliminates the guy on the far left. And I think the guy leaning on the right is Tie Domi. I'll excuse him too.

Nope. It's #26 - Troy Mallette. How embarrassing that Troy's hockey card is a group bench shot. C'mon....you guys got nothing of him on the ice.

A 'hockey card' should include a photo of a player playing hockey. Period.

On the upside, this is probably more face time Troy Mallette has had in over 10 years.

To the bike spokes!!
Posted by bamlinden at 2:18 PM