Well, the second round of the playoffs are almost done (big congrats to the Canadiens...amazing stuff). My hockey pool is shot with the departure of my pick to make the finals from the West...Detroit.

This week's card highlights a great player from Wings' past - one who's career was cut too short. Thankfully, it was not his life that was cut short. 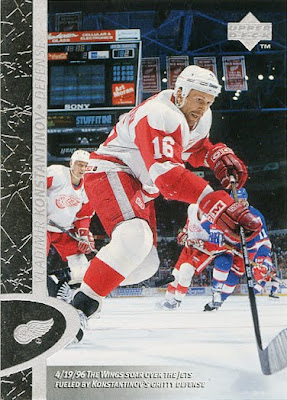 1996/97 Upper Deck
#52 Vladimir Konstantinov
First, the card. I will reiterate a point I made a couple months ago. I really like this set. The photography used in some of the cards is top notch. This card is a great example of that.

A great low angle shot (how did the camera guy get onto the ice surface...cause that's what it looks like). Great framing of the player and lots of action in the background.

Normally, shots like this are reserved for the goalies. I love the fact that there is some 'outside the box' thinking going on here.

Now, some stuff on the player. Vladimir was drafted 221st overall in the 1989 draft. Did you know he was involved in the 1987 World Juniors brawl (Canada vs. Russia....the Punch Up In Piestany).

He was a rough, rugged, physical defenceman who took care of his own end. He won the 'plus/minus' award in the 1995/96 season with a +60. It was the highest total in over 20 years (since Gretzky had a +70 back in his Oilers heyday).

Sadly, Konstantinov's a name more recognized off the ice as a result of the way his career ended.

Six days after the Wings won the Stanley Cup in 1997, Vladimir (along with teammate Viacheslav Fetisov and team masseur, Sergei Mnatsakanov) were at a party. When leaving, they hired a limousine. The driver, who's license was suspended at the time for drunk driving, lost control of the limo and hit a tree.

Konstantinov spent weeks in a coma before finally pulling through. He suffered serious head injuries and paralysis and to this day has troubles walking and speaking. That said, he has improved and can be seen at numerous Wings games during the season.

It was an emotional scene one year later as the Red Wings successfully retained the Stanley Cup. Konstantinov was wheeled onto the ice, surrounded by his teammates, to celebrate the win. Throughout the playoffs the Red Wings' catchphrase was the single word, "Believe".