Today I received the final card in one of my favorite subsets this year.

A one of a kind concept that has really been a popular choice among collectors. 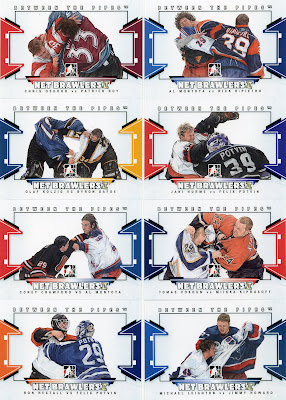 2009/10 ITG Between The Pipes
Net Brawlers II
Now who doesn't like goalies scrapping?

For years, card companies have steered away from cards depicting fighting. You would rarely see a Probert, McSorley, Boogaard, Schultz, whomever card showing them do what they do best.

So why the goalies?

Maybe because it's such a rarity to see two tenders drop the gloves. Maybe it's because they can sometimes put on one heck of a bout. Maybe because a card company just wants to try something different.

Whatever the case, the cards really appealed to me.

Some classics too! Hextall/Potvin.....Osgood/Roy. Definitely bring back the memories. 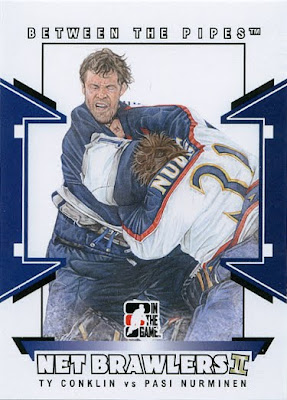 It's a 9-card set that doesn't use photographs, but rather an artist's painting of the fight. And ITG did a great job of using photos that hide the jersey logos (something they are not allowed to put on their cards). Innovative thinking.

Now why the Conklin/Nurminen card is tall vs. all the others is beyond me (I think it ruins the look when you have them in a 9-page sheet). The detail in the cards is really cool.

Originally released a couple years ago as a dual memorabilia 1/1 card (good luck finding one nowadays...most have been snagged up by player collectors), the demand for the cards was so great that ITG decided to put them out as a subset in this year's product.

Amongst all the mask cards I have received recently, this set stands out. A great add to the collection.
Posted by bamlinden at 11:27 PM