A flashback to what was (at the time) a higher end base set. One that was one of my favorites to collect. 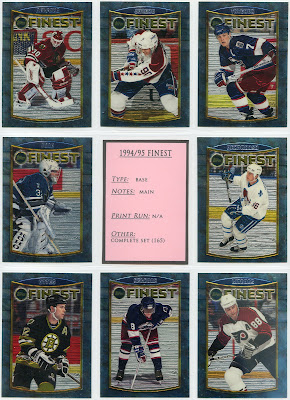 1994/95 Finest
This 165-card set was considered a 'super premium' set at the time. It is printed on a thicker card stock. Actually, it seems more like a 'plastic/photo paper'-type card stock. Something very different for it's time. I remember getting some of the cards and being disappointed by the protective film on the front. My first thought was to tear off the film...but I thought it would be best to keep it on should I want to trade or sell the cards.

With this set, I can now peel off the film to reveal a much more eye-catching card. I encourage all of you to try it sometime.

Anyways, let's take a closer look at the cards. 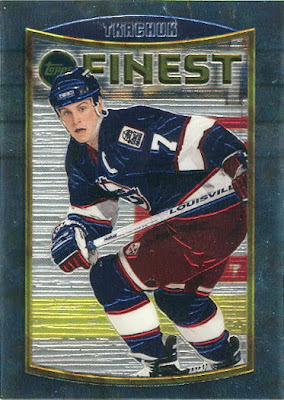 The front of the card utilizes a very appealing blue marble-type background. Unique at the time and very identifiable. The gold border holding the player photo is a nice frame for what mostly are not very exciting player photos.

Another unique aspect of the card is that only the player's last name is one the front of the card...at the top. The Topps logo and the 'Finest' moniker are placed in the background of the photo. A nice layering effect.

The card photo has a bit of an embossed look to it giving the metallic feel a little more authenticity. 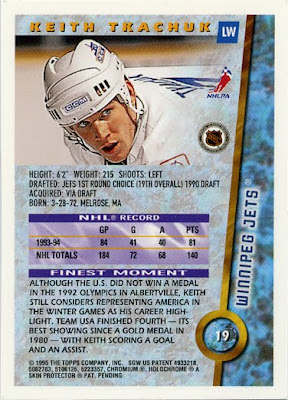 The back of the card drifts quite a bit from the front. Only a small portion of the blue marble look is used. The player name at the top of the card uses a completely new font style (one that doesn't appeal to me too much), and the player position is loosely placed next to it.

Stepping back, the layout of the entire back looks a little simplistic.

The player photo on the back has no framing and is just plunked down below the player name.

More plunking as the player bio and stats are beneath the pic. Not a big fan of that layout.

The 'Finest Moment' is kind of a neat idea. I'd prefer if it was more the focal point of the back of the card as opposed to an afterthought.

The team name down the right side is ok I guess, and it seems the card number is what really gets the border treatment. Huh.

The logos to the right of the photo are just an eye-sore and I'd much rather see them at the bottom of the card (actually, I'd like to see them gone completely...but that's just me).

Not an impressive backside and it really doesn't blend well with the front of the card.

What I really liked about the set at the time was the World Junior's subset, including the big card in the release, Miikka Kiprusoff's rookie card.

Other than that card, the set can be built relatively cheap (compared to what it cost back in the day).

A decent player selection and a flashback to some names not heard from in a while make this a potentially fun build. That said, it's not a terrible set by any means, but one that really hasn't held the test of time.

Too bad, because it had some promise.