TO THE BIKE SPOKES!!! - Jim Sandlak

Well, after nearly two months of long work days, weekend tournaments and a neglect of pretty much everything in my house (I'm doing laundry right now....because I HAVE to), things have calmed to a point where it's a 3-day weekend for me.

So it's another trip to the golf course today (hopefully the weather will co-operate) where I'm not predicting a score. I've been trying to break 90 for 3 years and my last round was a disastrous 111. Ouch.

Let's get to the topic at hand. This card was discovered when going through all of my old cheap base cards that I've finally packed up for the last time. If I can't get rid of them by Christmas...they will be donated.

I had to pull this card out because it just looked odd every time I came across it. 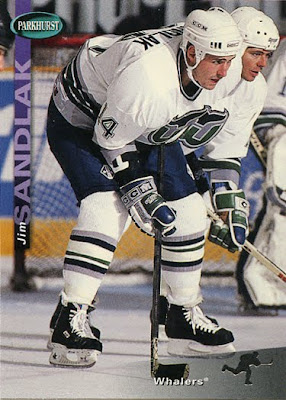 To me, it looks like a two-headed, four-legged, monsterjersey two-sticked defenceman.

Maybe Hartford was trying something different. After all, it would be something to see a creature like this out on the ice patrolling the zone.

Still trying to figure out how 'they' decide to use this photo out of all the others to put on the front of a hockey card.

The photo on the back of the card looks nice. It shows Sandlak throwing a pretty solid check on Marty McSorley.

With that...Jim Sandlak (and the head of Brad McCrimmon), I only have one thing left to say...

TO THE BIKE SPOKES!