Well, I had some time tonight so I thought I'd share one of my favorite hockey photos bar none.

This card is more of a tribute to the photo (as I remember it more seeing it in magazines and books) than it is a great hockey card. 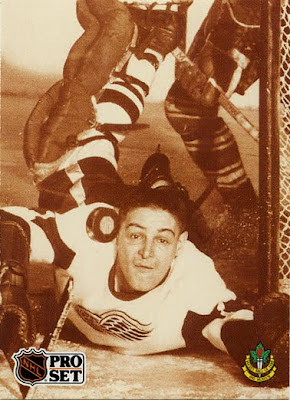 1990-91 Pro Set
#343 Terry Sawchuk
Yes, a Pro Set card has made the ranks of elite cardboard photography. Believe it.

The back of the card says "Terry Sawchuk....The True Mr. Zero". Such was the case back in 1990. Martin Brodeur was just beginning his assault on the shutout record. No other goalie had the aura and mystery quite like Sawchuk had.

The card back further states "Often regarded as the finest goaltender of all time, Terry Sawchuk spent 21 seasons in the NHL, registering a career GGA of 2.52 and recording 103 shutouts, the all-time mark for professional netminders. He was awarded the Calder Trophy while with the Detroit Red Wings in 1950-51. He registered four shutouts in eight games in the 1952 playoffs as the Wings took their fourth Stanley Cup. A four-time Vezina Trophy winner, Sawchuk had a major role in the Toronto Maple Leafs' Cup-winning season in 1967."

Yup....he was one of the most dominant goalies ever. I remember teammate Alex Delvecchio once saying that Terry would crouch in his net preparing for a shot with a confidence and swagger that basically said 'I dare you to put the puck by me'.

The card photo is just a gorgeous snapshot of an era gone by. The perfect framing and the perfect timing for the photo. The puck just crates that 'frozen in time' feeling.

Take a look at the pads Sawchuk is wearing, or the stick and gloves of the player behind him. You get a bit of a glimpse of the blocker and catcher and the fact that Terry is without a mask is insane by today's standards. But the photo would not have had nearly the effect if he was donning a face guard.

To top it off, the sepia tone of the photo just sells the card even more to me.

Like I said, a gorgeous snapshot in time.
Posted by bamlinden at 10:55 PM