Sorry for the lack of posts lately. Summertime is nearing an end and so is the extreme hectic nature of my job. By the time hockey season starts, I should be back into the groove.

It's weird, blogging really makes me feel like I'm accomplishing something with my collections and projects. The lack of posts lately reflect my feeling of disorganization.

Soon to be rectified.

Anyways, here's another gem that's been sitting calmly in my closet for a couple years now. It's a book that I vivdly remember borrowing from the library when I was a kid......over and over and over. To the point where I was contemplating 'losing it' just so I didn't have to go through the hassle.

My good judgement got the better of me and I resisted the notion. 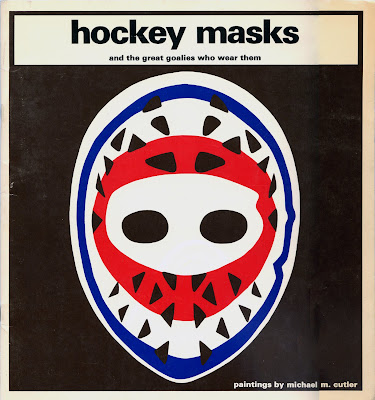 Hockey Masks and the
Great Goalies Who Wear Them
by: Michael Cutler (circa 1977)
The concept of the book is real simple. Basic drawings of some of the goalie masks in the NHL. And when I say basic....I mean basic. Check it out. 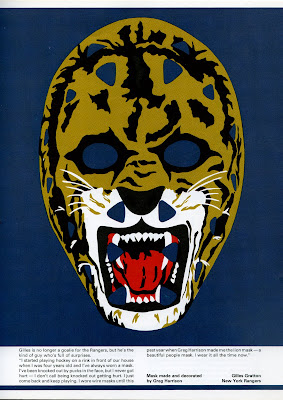 My favorite mask in the book - Gilles Gratton. What a great idea. I would spend hours tracing the masks on paper and then coloring them in. Beat some of the lame Bugs Bunny coloring books I was working on. 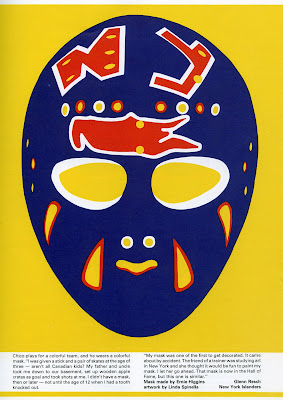 Chico Resch. Another great mask. There was enough detail in the pictures to capture my imagination, but they were simple enough to inspire a 7-year-old. Not a lot of words either. That was probably for the best as I was not interested at all in the words. Heck, I still skim over the paragraphs. 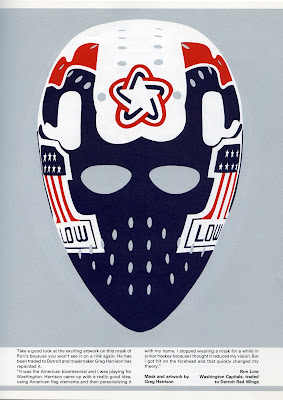 Ron Low....gorgeous. It just reeks of the 70's. Looking at these masks now, it's amazing to think that these things were high end back in the day. What a design. 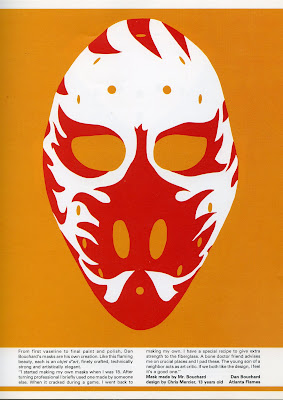 Dan Bouchard. He actually painted his own mask. Nice job Dan. This was one of my favorites to sketch since I was a Flames fan at the time.

I had been looking for a copy of this book for years. It had been out of print for a while and ebay auctions were ballooned up over $80 (this is a 15-20 page book.... softcover!). No thanks.

I finally found an ebay auction I could live with. $25 delivered. I was loving it. Until I received it. It was a library discard and the front cover had protective flaps and tape all over it. Lame - real lame.

It wasn't until just a couple years ago I found another auction on ebay. I noticed the guy lived in the same city as me. I contacted him and asked that if I won the auction, could I pick up the item in person. He did one better. He offered to deliver it to me. Heck, he was only a few blocks away from where I worked. Unbelievable.

I paid slightly more than I planned, but knowing I wouldn't be charged shipping, I had no problem. He delivered it the next day.

Pristine and in a nice protective sleeve. The book looked new. I was thrilled. By the way, the discoloring of the cover is not on the book. It came up in the scan as I had to scan it in two sections and then match things up.

It's now one of the highlights in my goalie mask collection.
Posted by bamlinden at 11:15 PM