I went to my local card store last week for 'Trader's Night'. I had a great time talking with other collectors, opening some packs, playing pack wars, chowing down on some 'za and making a couple trades.

It's the last one that has been weighing on my mind for the past few days. Hence my post.

Have you ever agreed to a trade where you ended up having 'trader's remorse'? I think that's what I have (just a bit).

Now, before I go any further, I'd just like to say that the cards I traded for are ones that I wanted. I instigated the trade and in the end made the decision to say 'yea' to the trade.

There was nothing sticky about the trade at all. NONE.

I got home that night and took a look at my cards. I then opened up my trade list and took the cards off that I traded away. That's when it began.

Just for some context, here are the cards I traded for... 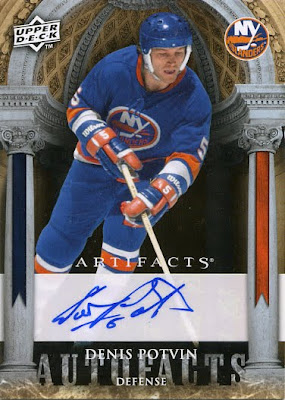 I was really drawn to this card. The signature is an ugly one....how odd.

Now I'm assuming this was the most expensive card in the lot (that'd be my first problem.....I didn't know the 'value' of the cards I was looking to get. Nor what I was trading for that matter). 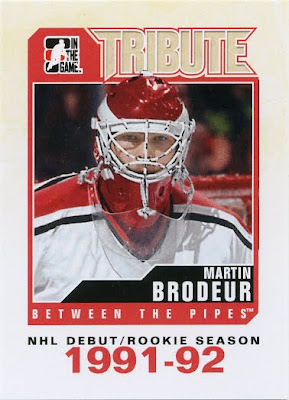 This is a nice Brodeur rookie mask closeup card. It'll go nicely in my masks collection.

Not a high end insert, but not a throwaway either. 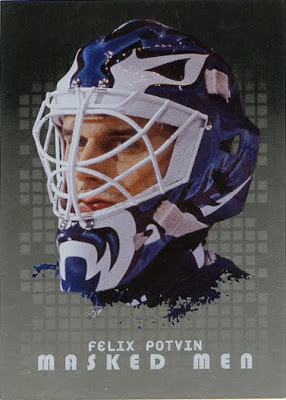 This Potvin Masked Men insert goes into my set I'm collecting. Another nice card, but the price on these have been getting lower by the year. 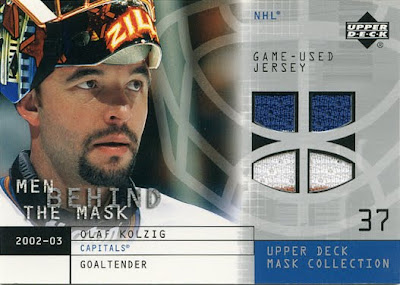 I've always liked the looks of these cards, but never started the set....until now I guess. I figured I'd add it in to the pile of cards I was looking for.

note: I didn't notice it until I saw the scan just now, but it is a 3-color jersey piece. How did I miss that? (again, something I need to pay more attention to as a trader).

There was one other card in the trade, a Matthew Lombardi jersey card. Again, not a super high end card. One that I actually assumed would only be a few bucks worth at best.

Again, all the cards in the trade are ones I am happy with, but I traded away a few nice cards.

Looking back, I wonder if I should have revised the trade. Too late now obviously, but I can't help thinking about it.

What really gets me is that I am asking myself - why is the 'value' of the cards of utmost importance? Why do I feel like I got the shorter end of the deal?

I got cards I wanted....I got rid of cards that had been taking up space in my trade box for a while. Makes sense that the trade would be a success.

So what if I got rid of cards that add up to more than what I got back. A card that never gets traded isn't worth anything really.

I'm really on the fence on this one. I like what I got....so why mention it? I mention it because this trade left me feeling different than it normally does.

What are your thoughts when it comes to trades? What is a 'fair trade' in your eyes?

On the flip side....what is an unfair trade?

This past experience has not made me question trading in the least. At the end of the day, I'm not losing sleep over it. It's just an observation that I've made over the last week.

I look forward to doing a lot more trading in the future. Getting stuff for my collections and projects.

Having fun!
Posted by bamlinden at 1:00 AM