That's right....I've finally got my hands on some of the new Score cards recently released.

I picked them up last Sunday at Toys R Us. They had blaster boxes on for less than $5. My sister was invited to a staff 'friends and family event where they got an additional 15% off of their purchase. The blasters were already priced down to $5.98 so it was a no-brainer.

I'll have a more in-depth review of the product on the weekend. In the meantime, here is a look at one of the cards that now holds a spot in my Raise The Cup project. 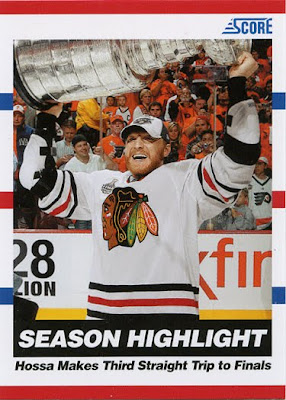 "Most players spend their entire careers just hoping to get to one Stanley Cup Final. Marian Hossa not only went to three straight from 2008-10, he did so with three different teams."

Chicago must have thought they were getting jinxed when they picked up Hossa after failed attempts with Detroit and Pittsburgh. Not so. While he wasn't a dominating force in the Cup run, he was a valuable piece of the puzzle.

A puzzle that doesn't look quite as complete this year so far.

As a quick note....these cards look pretty good from my initial impression.