I was digging through the closet again and noticed a lot of mask stuff that hadn't received a lot of appreciation recently. So I got the camera out and did some reminiscing.

I came across a set of four posters from the 1988 Winter Olympics held here in Calgary. These posters were a part of a display put on at Canada Olympic Park (where they held the ski jump, bobsled, luge, etc.). 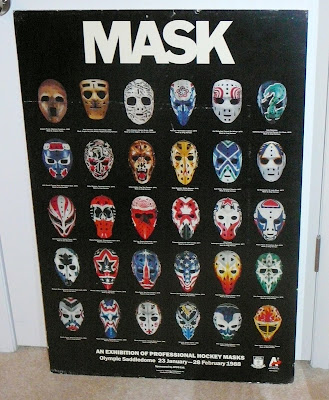 These posters are your typical 'poster size' and are on a thick backing board.

They have taken a bit of a beating over the years, but when I saw them on ebay a decade ago I jumped at the chance to own them. I haven't seen them come up too often since. 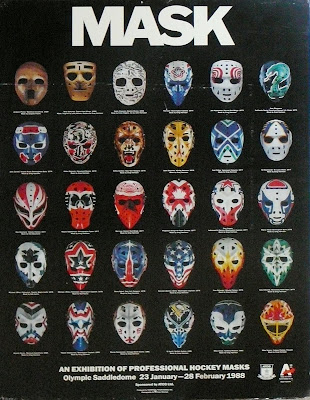 Here's a closer look at the 'montage' poster. I'll get to some feature shots of individual masks in a moment.

First, let's take a look at the other three posters I have in the set. 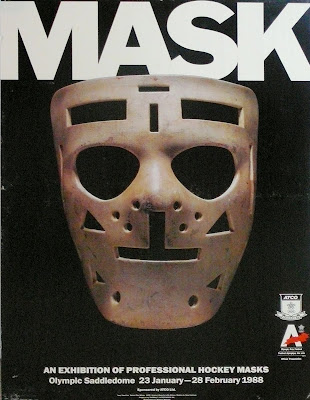 One of the coolest masks from the original era of goalie masks. Terry Sawchuk's 'cat' mask just reeked of intimidation when he put it on. Add to that his aggressive stance that dared shooters to try and put the puck past him and it was a match made in goalie mask heaven. 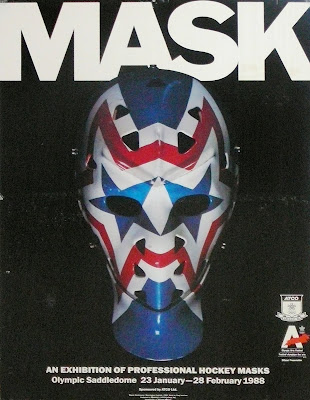 This mask belonged to Wayne Stephenson during his Washington Capitals days. It's such a simple design, but does it ever look cool.

The neck piece was a rarity at the time and just adds something to the overall design. 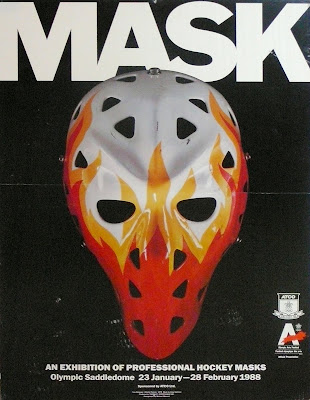 Yves Belanger didn't have a memorable career, but thankfully his name lives on through his mask. What a great lid. So nice, that the Flames had a giant version made and it is placed outside the Saddledome for all to see. 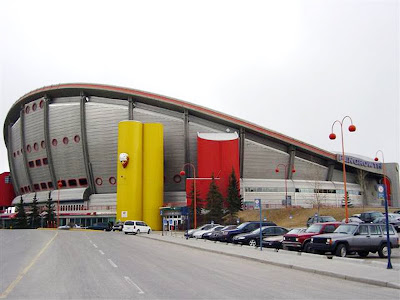 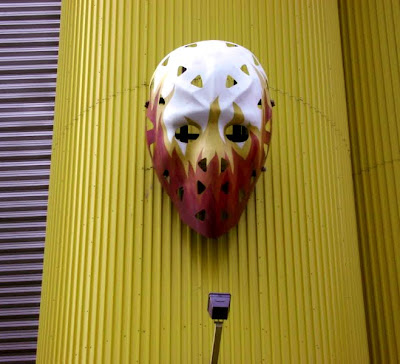 There's a trivia answer for those of you the next time you are at the Dome. 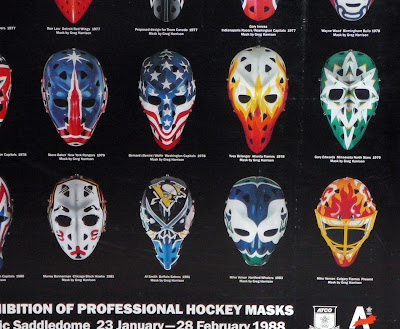 Let's go back to that 'montage' poster and take a closer look at a few of the masks featured. 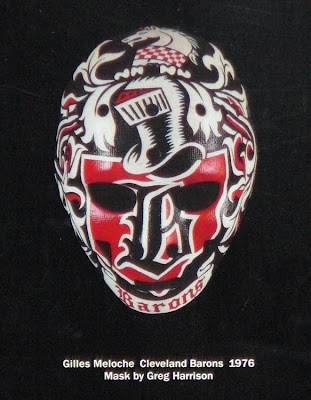 One of my all-time favorite masks. In fact, if I had to pick just one....this would be it. 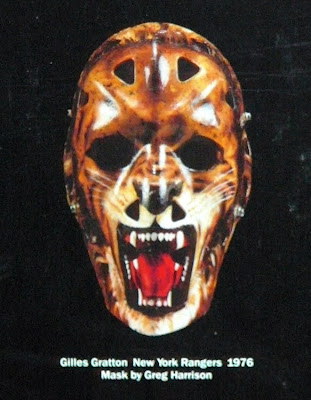 A classic. This mask was decades ahead of its time in design. What fantastic detail and theme. He must have looked like a fish out of water out there with his Ranger blue uniform. Tremendous. 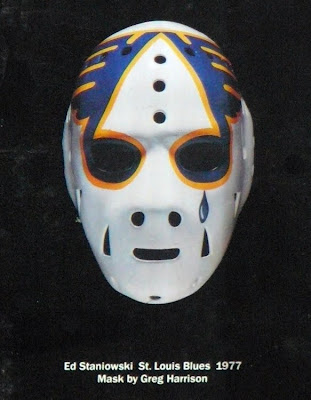 Ed Staniowski had a great simple design to his mask. Years ago, I had the opportunity to interview him and I asked him about the teardrop. I was expecting a heartbreaking story. Instead, he just said that sometimes the goalies just need to let out a tear. 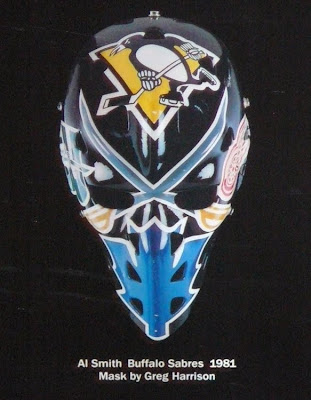 This is a rather unique mask in that it features multiple team logos. A tribute obviously to the teams he suited up for. 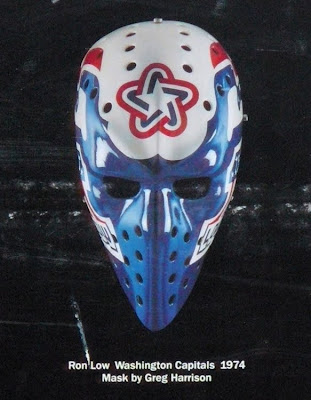 This Ron Low mask, much like the Stephenson, has that distinct 70's feel. The red, white and blue colors looked awesome paired up with the uniform. 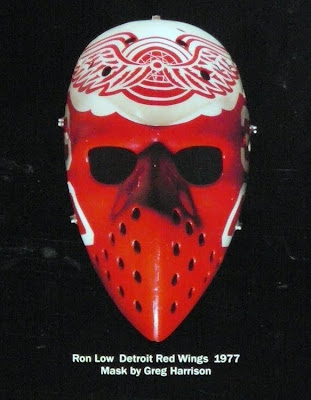 Here's another Low....but one that doesn't get near the face time. The bold contrast really stands out for me. Another winner. 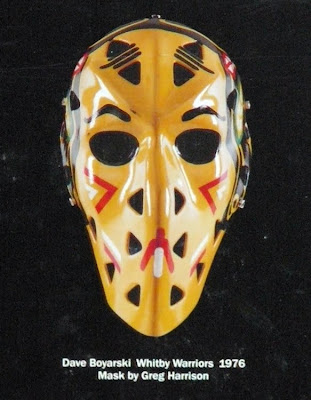 Hey, isn't that a Murray Bannerman mask? Nope...no it's not. Designed by the same mask maker, Greg Harrison, this mask saw time with the Whitby Warriors. A senior mens team that played in the Ontario Hockey League.

Mike Keenan coached there for a year in the late 70's. Yet another trivia answer. 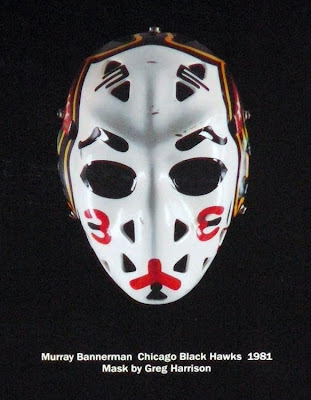 Here's the Bannerman. This was my favorite mask in the 80's. Too bad he played backup to 'Tony O' for all those years. 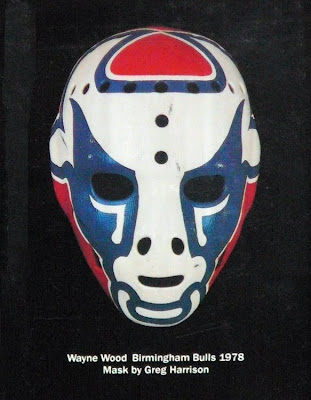 This poster not only featured NHL goalies, but WHA masks as well. This Wayne Wood lid really looks cool. I'd like to get more stuff from the crazy days of the WHA. Some great masks made the rotation through the league. 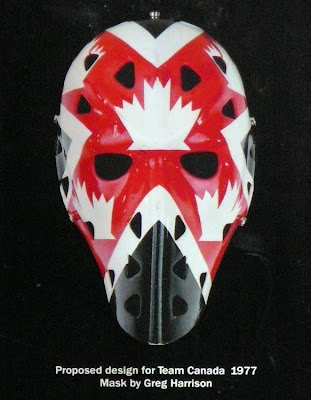 Lastly, a prototype mask for the Canadian team that never saw the light of day. A great find on the poster. It really ties up the diversity of masks.

Well, it was a great look back into the past for goalie masks. These crude pieces of fibreglass really have gone from a protective piece of equipment to a true piece of art.

I'll end with some video featuring a goalie who had his mask on the montage poster as well. Gary 'Cobra' Simmons playing for the Los Angeles Kings vs. Ken Dryden and the Montreal Canadiens. Enjoy the vintage masks!