Now I must apologize for to all the Nabokov fans. I had this card ready to go for this post a few days ago. Little did I know it would be the reason he would be released from his KHL team. Sorry about that.

It seems fitting that this card would be the featured card in this installment of Cardboard Photography. Nabokov.....Upper Deck..... and good photography. Nice. 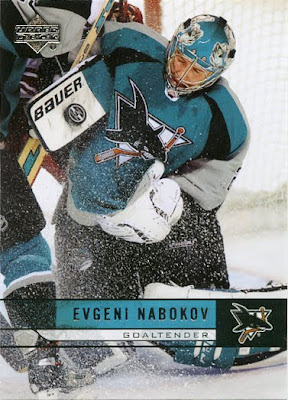 The framing is solid, but it is the action within the card that puts this over the top.

What to look at first....the puck or the ice shavings? This card is one of the nicer ones to show an actual puck being saved. Normally, you get a glimpse of the moments before, the moment after or just a goalie in his ready position. Rarely do you see an actual save captured on cardboard.

The ice shavings just give the card a feeling of frenzy in the crease. Nabokov looks to be in tight quarters to begin with, but add to that the frantic action (or implied action) and the card shifts from a one or two dimensional photo to a multi-dimensional one.

The simple card design really makes you focus on the photo. I can only imagine how much the card would suffer if it had been an intense and overblown design.

A great looking card of a goalie who we might see back in the NHL sooner than later.
Posted by bamlinden at 12:33 AM