It was 'Trader's Night' at the local card shop and I wanted to make it down there as it would be the last one of the year (and it's been a super busy time at work and a trip to the LCS can be very therapeutic).

It was a very good decision to do so.

In addition to winning two rounds of pack wars (one Upper Deck Series I and one O-Pee-Chee), finding a few cards for various projects and showing off my newest Trevor Linden centerpiece, I managed to land a card for the Linden PC that has eluded me for 5+ years (and I watched it being pack pulled!).

Overall, it was a great night of hockey cards in general.

One of the great pickups was a card for my 1 vs. 100 project. The Cup makes an appearance and I've had my eye on this subset for a while. 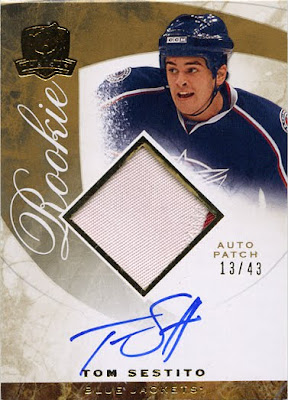 2008-09 The Cup
Gold Rookie Auto Patch
#90 Tom Sestito /43
This card is thick! A monster of cardboard. And while the player is a virtual unknown, the patch is a boring (barely) 2 color swatch and the autograph really adds nothing to the card, all of that works to my advantage. The only thing I really cared about was the 13/43 serial number.

I made a trade for that card (plus a few others) and gave up less than I thought I would have to.

Another unique card to add to the growing project. I hope I can land a few more over the next couple months now that work is letting up a bit.