Rarely do I go to a card store or a card show with the intention of finding a card on my Trevor Linden wantlist - especially if the card was released 5 years ago.

This past week though found me staring at a card that has eluded me for years. And to make things even more exciting, the card was pulled fresh from a pack right in front of me. 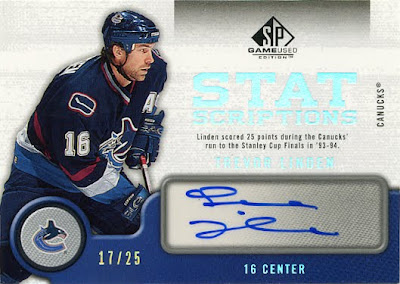 2005/06 SP Game Used
STATScriptions #ST-TL /25
I've seen only a couple other copies of this card over the past 5 years, so the moment I saw the card, I was on it - ready to make a deal for the card.

It didn't take long for me to secure the card and I am thrilled to cross it off my list.

What did I have to trade to get the card? 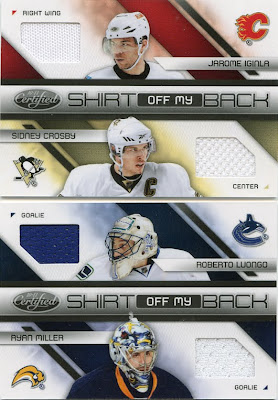 A Crosby/Iginla dual jersey card to some might seem like a lot for a Trevor Linden card, but a Linden /25 that has been a thorn in my side for so long - it was a no-brainer.

Add to that, if the card were to have hit the open market (ebay), it would have gone for a pretty penny.

A great addition to the Linden collection, just in time for Christmas.

Now why is the card numbered to 25? It might be too small of writing to read, but the card states that 'Linden scored 25 points during the Canucks' run to the Stanley Cup Finals in '93-94'.

Now that's a good excuse to add this video...his second goal of game 7 being the 25th point. Sadly, it wasn't enough, but no doubt - he's a clutch player.