TO THE BIKE SPOKES!!! - Mike Foligno

The card boom of the early 90's brought about innovative designs, checklists, inserts and an overall boost in product.

What they can both agree upon is that this card is empty. 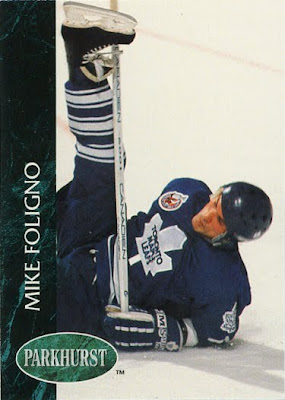 1992/93 Parkhurst
#415 Mike Foligno
No, this is not a 'horizontal' card. Yes, it's Mike Foligno photographed falling flat on his patootie.

Graceful indeed. Worthy of a hockey card even....according to Parkhurst.

Maybe because it was a high number series card there were just a limited number of Foligno photos. After all, he had only played for a season and a half in T.O. and missed a lot of the games.

You wouldn't want to capture hum doing his infamous leap after scoring a goal now would you? That's gotta be old hat - done many times before.

The only question is, did Foligno trip over his own stick and did he get 2 minutes for tripping?

To Parkhurst's feeble attempt at a card....


Now here's a treat for you...even a cameo from Pat Burns. RIP.