For those of you who frequent my blog, you've probably seen the pinnacle card in my Trevor Linden collection. 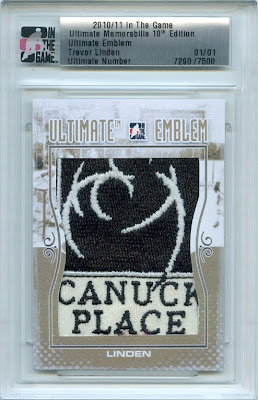 2010/11 In The Game
Ultimate Memorabilia 10th Edition
Ultimate Emblem
I picked this up late last year and it is without a doubt the number one card in my collection. As such, I dubbed it the Trevor Linden Card Of The Year for 2010.

Well, 2011 has arrived and so it's time to start selecting those cards that might make the grade.

The most recent 1/1 I snagged would definitely land top marks. Or how about the fight strap /3. A great addition to my collection.

But I think they (along with whatever else might come out this year) might be trumped by this gem. 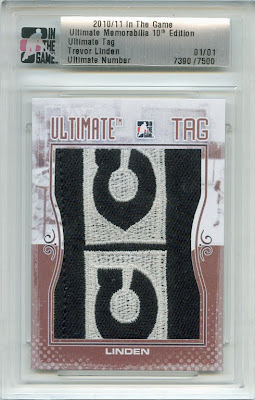 2010/11 In The Game
Ultimate Memorabilia 10th Edition
Ultimate Tag
I couldn't wait to tear open the envelope and gaze at my newest addition. Like the emblem card, it just looks really cool in person.

I received an e-mail from the guy who pulled it and asked if I would be interested. He knew I bought the emblem card (and how much I paid for it) and let me know the price tag.

The asking price was more than I was willing to bite on, but I did send a counter-offer which after a slight modification we agreed to.

A few days later and the notice was in my mailbox that the card had arrived.

Of the 7 Linden cards this edition of In The Game Ultimate, 6 have now found a home. With me owning two 1/1's, one /3 and a stick /24 and another Linden collector housing two other 1/1's, all that remains is the Ultimate Stick Rack 1/1. I haven't seen that one surface yet.

Good thing too. I need a break from all the Linden madness lately. Just a small one.
Posted by bamlinden at 6:28 PM