From the moment I saw these cards, I knew I had to have them. A couple of rare finds for the Linden collection have finally arrived.

For all of the negatives ebay has, there are definitely some positives. Without what I call 'the world's biggest garage sale', I would never have landed these two beauts. 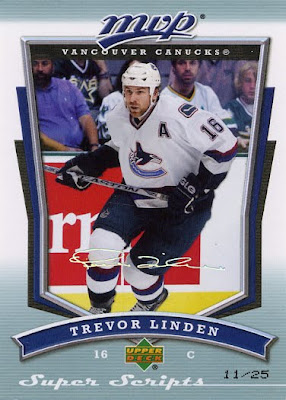 2007/08 Upper Deck
MVP Super Script /25
MVP always seems to be a lightly busted product and so finding these super script are tough. How tough? Well, this is the first copy of the card I have ever seen.

With the influx of Linden cards on the market calming (until the next big release he'll be in.....I'm looking at you Decades 1980's), I was very surprised at the finishing price. A paltry $40 (yes, for a Linden /25, that was pretty good in my opinion).

Mere days after winning that auction, another rare boy came up for bids. 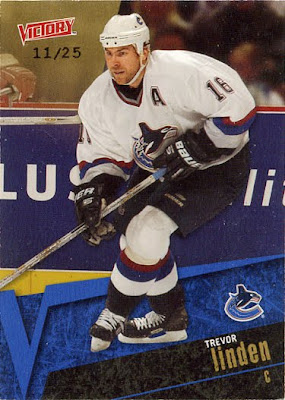 2003/04 Upper Deck
Victory Gold /25
Now if you thought the previous card was rare....here's a parallel that never comes to light (for any player hardly). The 03/04 Victory release is one of my favorite 'low end' sets. The design and execution is really nice. The inserts are excellent (especially the Freshmen Flashback) and the player selection is quite good.

But the real draw are the parallels. The bronze /199, silver /50 and gold /25 cards that are next to impossible to find (again, due to the fact that this product was so lightly broken). How they can book for pennies is insane.

Currently, my Linden collection has the bronze parallel /199 and now it houses the coveted gold /25. It's a little rough around the edges, but I could care less. I might never see another copy of it.

Knowing that, I decided to prepare for a strong bidding war. I expected this card to break the $100 mark. Not only was I wrong, but the realized price ended up being less than what I paid for the MVP Super Scripts.

Two cards that I am thrilled to cross off the wantlist. It just goes to show that eventually, the cards pop up and you'll have your chance.
Posted by bamlinden at 6:10 PM