Another one of my pack war victories this past week garnered me some of the new SP Authentic product put out by Upper Deck.

I've never been a collector of this set, but thought I'd join in. 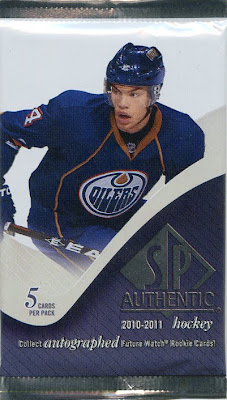 The one round victory gave me 10 or 11 packs worth. Not bad at all. 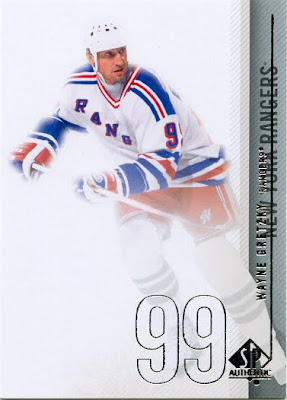 Except that the base cards are not really my style. There's some good, but a lot more bad for my liking.

First, the good. When looking at the card and letting the light reflect over the surface, you get the great effect of the glossy photo popping out of the matte background. It's a really nice look.

Great card stock and a clean look. Too clean if you ask me.

The over-abundance of white just makes the card a little boring in my books. The 'fog' effect really takes away from what is a decent photo selection. Some cards show players virtually disappearing.

The names along the right hand side are also a miss for me. Tough to read in the scan you say? Tough to read up close too. Cards just shouldn't be that way.

I ended up getting more base than I originally had won since I helped someone finish off the base set...so he gave me all of his doubles.

Did pretty well with the inserts too. These HoloFX cards run 1:12 packs and I ended up with 3. The cards look nice and they reek of reflective goodness. 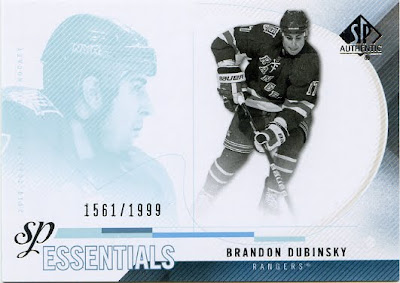 This card.....reeks of something else.

Numbered out of 1999, these SP Essentials have a horrible design flaw. Why go with the black & white photo? I've seen it done a few times recently (Artifacts comes to mind) and I hate the look. Give me some color on my card (unless you were made in the 20's). 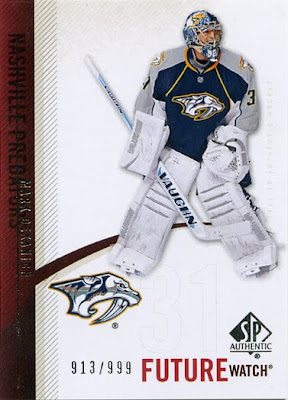 Cool. A Future Watch card. These are a tough pull coming 1:48 packs. Too bad I have no clue who Mark Dekanich is. 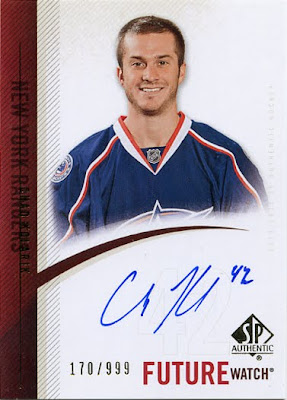 Even cooler! A Future Watch Auto. These must be even tougher to pull.

What? Excuse me? They're not?

Maybe it's the terrible player I received. Never heard of Chad Kolarik.

Well, at the end of the day, this SP Authentic pack war victory didn't land me too much (considering in a different round there was a hard signed Bobby Orr won....but hey, I got.....Chad Kolarik). The design isn't for me and neither is the breakdown of the various inserts.

I guess it could have been worse.....I could have not won the round. That's debatable though.
Posted by bamlinden at 1:06 AM