BEHIND THE MASKS - Dwayne Roloson

Well, the teams are set for this year's Stanley Cup Finals. I for one am looking forward to a great series. Lots of great storylines and at the end of the day.....one city is going to go bonkers.

I watched Game 7 between the Lightning and the Bruins tonight. Once again, Dwayne Roloson was in net for the Bolts.

Dwayne Roloson....I remember him from way back when he came into the league with the Flames. That was 1996 and I'll admit, I wasn't a big fan of his.

I never saw him as a bona fide #1 goalie. Especially when he tag teamed with Manny Fernandez in Minnesota. I was convinced that he couldn't carry the workload.

I still wasn't convinced when he played with the Oilers or the Islanders. And when he went over to Tampa Bay, I thought that the team took a step back in net.

Boy was I wrong.

Roloson turned back the clock. He was inspiring to his teammates, had the confidence and swagger of a starter and took the team that was on the verge of falling out of the playoffs and helped them get one game away from the Stanley Cup Finals.

He's got a little more respect from me, and I hope he comes back next year to prove that it wasn't a fluke.

Now onto a great mailday.

At the time, he mentioned that he would be on the lookout for anything they did for Dan Ellis. Well, Dan Ellis turned into Dwayne Roloson and sure enough - they did.

Ron was quick to e-mail me letting me know that he had an extra. It arrived in the mail today. 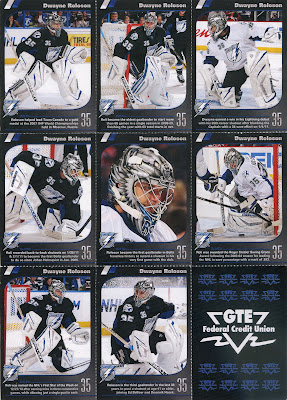 Roloson doesn't have enough Tampa Bay mask designs to warrant a whole sheet of masks, but that doesn't depreciate from the coolness (as well as the kind gesture).

One thing that really caught my eye was the fast facts at the bottom of the cards.

Did you know that Dwayne became the first goalie in Lightning history to record a shutout in his very first game with the club?

Did you also know that he became the oldest goaltender to start more than 60 games in a single season (he had 63 total starts in 2008/09)?

And lastly, did you know that Dwayne used to walk to school.....20 miles.....uphill both ways? For real!

Now, I haven't separated the cards on the Mike Smith sheet......yet, but because some of the perforations were already coming apart on the Roloson sheet - I decided to tear away.

So let's take a closer look at the mask card. 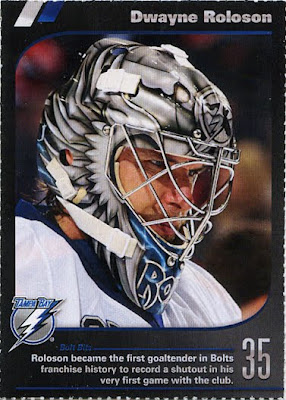 Yes....very nice. This “Thor, God of Thunder” helmet was designed by Roloson’s artist of choice, Jesse Acciacca of Jesse’s Custom Design. In his own words...

"The new paint job is inspired by Thor the god of Thunder and Lightning. I tried to get away from most of the paint styles used on other goalies that have played for Tampa. All Blue with lightning and some characters. It is a Full Thor Helmet with his Hammer striking down on backplate. Roli’s name on chin as we have always done."

I really like the silver and black tones. The lack of color really makes the design texture pop.

Thanks again Ron for the great addition to my collection. I really appreciate it. And best of luck Colin to Patrice and the Bruins (I know you're rooting for them), I hope it's a series that will be talked about for many years to come.
Posted by bamlinden at 1:37 AM