BRING ON THE BRUINS!

The 1994 Stanley Cup Finals series between the Vancouver Canucks and the New York Rangers go down, in my books, as the greatest final series I have ever seen.

There were tremendous ups and downs and Game 7 was one I will never forget (and believe me....I've tried).

It was Vancouver's best attempt at winning the Cup.....until now.

This season, the Canucks were probably the most consistent team throughout the season. The President Trophy winners managed to slay the Blackhawks dragon in the first round and the Sedins have hit their stride this past series.

And I truly believe they haven't played their best hockey yet.

The Boston Bruins, well they too have some interesting storylines heading into the Finals.

A team rich in history, they have not had a shot at the cup in over 20 years. Goalie Tim Thomas alone has taken one of the most amazing paths to finally land in the Stanley Cup Finals. Nathan Horton has flourished as he gets his first taste of playoff hockey. And Patrice Bergeron gets an opportunity to realize a dream.....after coming close to having his career taken away from him.

One thing is for sure....one city is going to go absolutely hog wild in the next couple weeks. 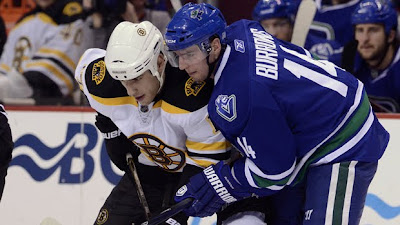 This series is one that I am very much looking forward too. Not just because of what I think will be some exciting hockey, but also the friendly wager I have set up.

If you are a regular reader, you know that I am a big fan of the autograph hounding adventures and hobby-rich quests of Ron and his son Colin over at Hound Central 5.0. It's no secret that Colin's team this playoff season is the Boston Bruins. And having made a custom Patrice Bergeron card for him in the past, and receiving a fantastic team sheet from him a few months ago, I knew there was a great opportunity to have a little fun with this final series.

Not only has Colin accepted, he stated that he's looking forward to his new card.

I'm sure he meant to say that he's looking forward to designing a fabulous Canucks team sheet. :)

I can't wait for these finals to begin!
Posted by bamlinden at 12:45 PM