It's been a little slow in the Trevor Linden card department lately. Although that should change with the newest Panini release 'Contenders' as it appears he has a number of different cards, parallels and yes....another 1/1.

In the meantime, this mailday from last week should serve nicely as a show & tell. 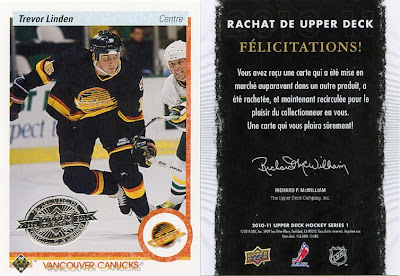 2010/11 Upper Deck French
#256 20th Anniversary Buyback
When these were first released, I saw a couple pop on ebay. I wasn't sure of the print run so I held off.

Over the past couple months though, none showed their faces. I was getting a little worried that the next one that showed its face would carry with it a harsh price tag.

Thankfully, that was not the case. This one came up for grabs and I snagged it for well under what I thought it would go for.

Nothing special about the card other than the silver foil stamp. But, it's one more Linden card to add to the collection. Every card counts.

I remember when this Upper Deck series was originally released in 1990. It was one of the products responsible for getting me back into the hobby and the one set that was the 'must have'.

I guess some things never change.
Posted by bamlinden at 11:50 PM