LINDEN CARD(S) OF THE WEEK - A Triple Play Mailday

Actually, it was a four card Linden mailday for me today. A fantastic bunch of additions to the growing collection.

Good story too (you knew I'd have one).

I recently saw an auction for a pretty rare Linden card on ebay. Old and low numbered. 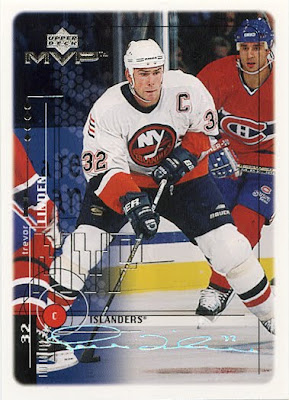 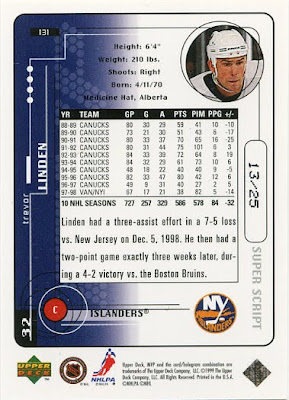 I didn't expect to see a card like this pop up on ebay...they never do. But what I was really intrigued by was the seller. I recognized his name from some great Linden battles years ago on ebay. Seeing him put this card up for grabs prompted me to immediately contact him.

He had three. And nice ones too.

I ended up winning the auction on ebay and we struck a deal for the entire lot. Funny thing is....I don't need the super script. I didn't realize it until after the fact. If I'd have known I had it, I might not have been so aggressive in seeing if he had more.

So the package arrived today (just in time before what looks to be a postal strike in Canada this upcoming week). I was pretty excited to see the goods. 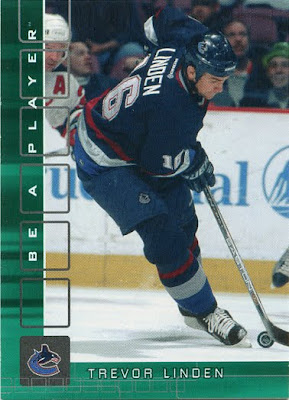 2001/02 BAP Memorabilia Update
#495 Emerald /10
These cards just don't show their faces. Well, almost never. I somehow fluked out and snagged a Brad Richards from this same set about a year ago for less than $5.

Sadly, this Linden cost a little more. But I'm still thrilled to add it to the collection. 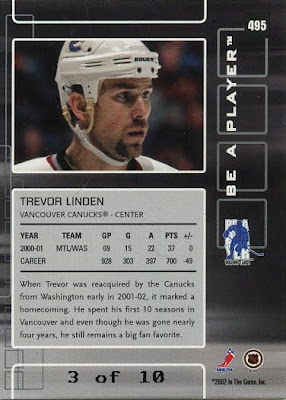 Look at that serial number. Now that's a beautiful sight. 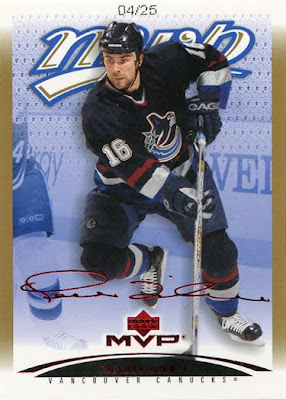 2003/04 Upper Deck MVP
#413 Canadian Red Script /25
Another one I never thought I'd find. Not as tough a parallel to track down (and can be fairly cheap too). That all changes when you're talking about an eight year old Linden card though. 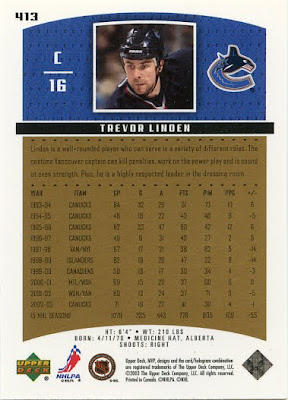 Here's the back. Nothing special, but I thought I'd be consistent when presenting these cards today. 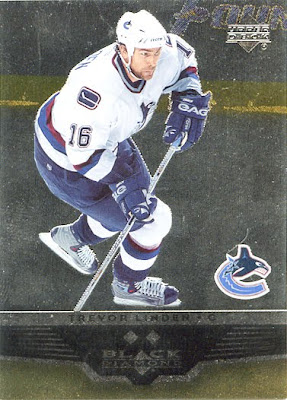 2005/06 Upper Deck Black Diamond
#125 Double Diamond Gold /10
Last, but certainly not least, this toughie (which scans terribly). I remember tracking down a copy years ago when this came out. The price tag was too high for me at the time (I was still new to the crazy card prices for Lindens). I let this one pass.

The guy put it up on ebay eventually (thinking he would get a real solid price)...he ended up losing money on the deal. I was kicking myself for not getting involved in the auction. It sold for less than the green copy I have /25.

I never saw another copy of the gold until today. 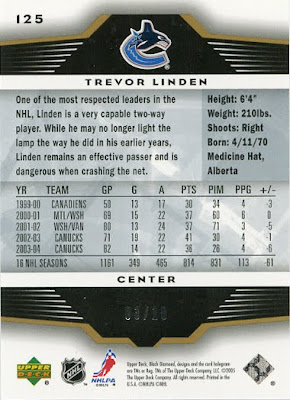 Again....a beautiful thing (if you can see it). Those low numbered parallels are a sight for sore eyes (unless you're talking about the large number of new low numbered product out these days (Panini Playoff Contenders....I'm looking at you).

So that's three to scratch off the wantlist and a real solid card to add to the traders pile. What a fantastic mailday (one of the all-time best).
Posted by bamlinden at 1:50 AM