I headed up to Edmonton this weekend for the 'Summit II' Sports Collectibles show. Normally I wouldn't travel up to Edmonton for a show...but I had good reason this time (more on that later).

I managed to pick up a few cards for various projects and I was able to see some amazing collectibles. Some old game-used jerseys from the 1970's were on display at the In The Game booth. Stunning to say the least.

Other sellers had some great vintage cards, jerseys, sticks and memorabilia. It was like going through a little mini time machine. A very different vibe from the shows I'm used to in Calgary....in a good way.

I might just have to make my way up there again next year.

One thing that was definitely on the 'to do' list was bust a few boxes of ITG's newest product - Decades. Why? 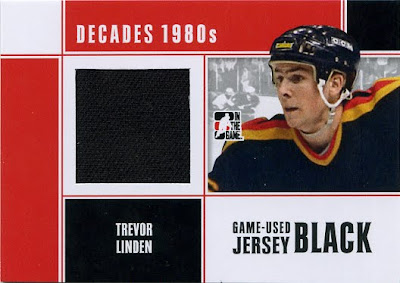 Cause this guy is in it....my wallet is already crying.

Actually, It wasn't so bad. I bought 4 boxes and I found it to be a real fun break. This product celebrates the decade of the 80's so I knew it would bring back some great memories for me.

You get nine cards in a box - all of them 'hits' so no base cards. Three hard-signed autograph cards, three authentic game-used memorabilia cards, one Decades rookie card, one non-memorabilia insert card and one 100 Years of Hockey Card collecting card. Guaranteed. 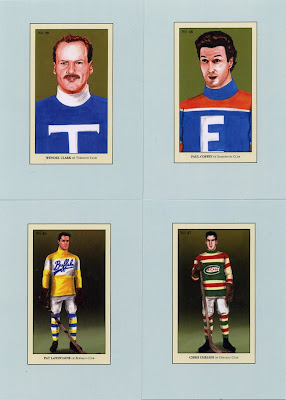 The 4 '100 Years Of...' cards. These have been inserted in numerous ITG products this season, so building the set would take time. I'm on the fence when it comes to the design. Love the concept though. 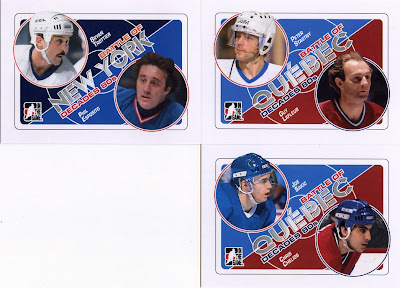 I ended up with three 'Battle Of' cards. Would have preferred a mixture of non-memorabilia inserts, but you get what you get. How many of you remembered that Phil Esposito played for the Rangers....in the 80's? I did. 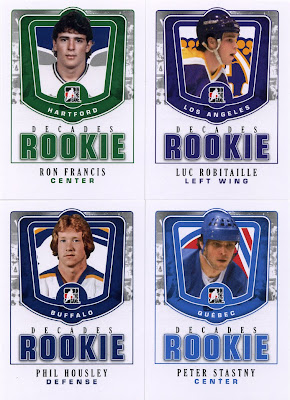 ITG's version of the rookie card. Cool design and look at the mugs on these guys. Francis looks so young. I really liked these cards. 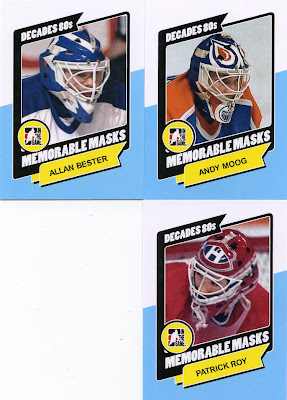 But I liked these even more. I traded for a couple (I pulled the Roy myself). Definitely planning on getting the entire set. That Moog is awesome. You never see photos of him in an Oilers mask...he's always wearing just a helmet. 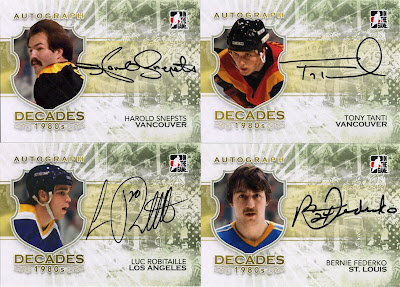 On to some of the autos. Three in a box and they're all hard signed. The checklist is a who's who of 80's hockey (or should I say - Who's That!). Actually, it's a bit of both. Seeing some of the autos coming out of the boxes yielded a 'Oh man....I forgot about him' comments.

I traded for the Snepsts and pulled the Tanti. I thought I had the Linden, but no. I will have to trade for it now. 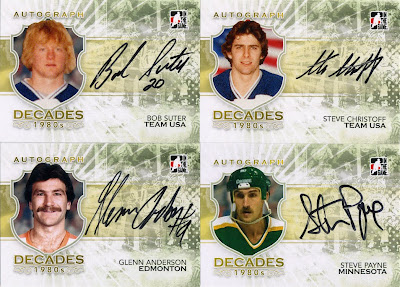 A great treat in this product are the Team USA autos. Every member of the 1980 Miracle On Ice has signed. Now that's an impressive feat. 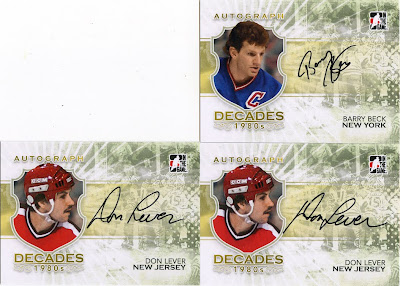 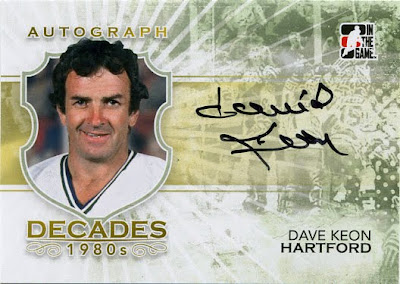 This Dave Keon is a shortprint so it should come in handy when it comes to gaining a Linden in return. What a great auto. 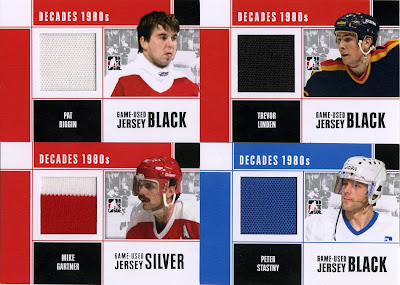 Now the jerseys. You've seen the Linden (which I traded for) so that's a start. There are three versions of jerseys for each player (a black version, a silver version and a gold version). Each has a print run more limited than the previous.

For me, it just means more Linden cards to add to the wantlist. So be it ITG....so be it. 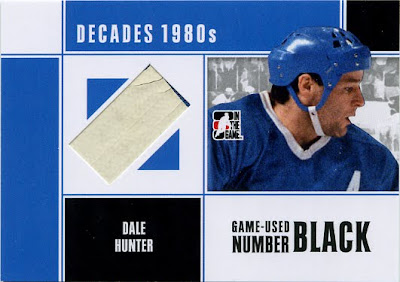 This card is pretty cool in person. Normally with patch cards, you see stitches and such. Because this is a Nordiques jersey from the 80's, it's got the ironed on plasticy stuff. Love it. 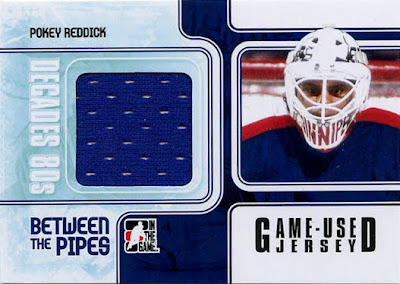 Along with the normal jersey cards, there are various subset jersey cards available in the product. You pretty much need an abacus to stay organized with all the jersey cards and parallels and subsets.

This Pokey Reddick card should help me out - since there's a resurgence of Winnipeg stuff right now. 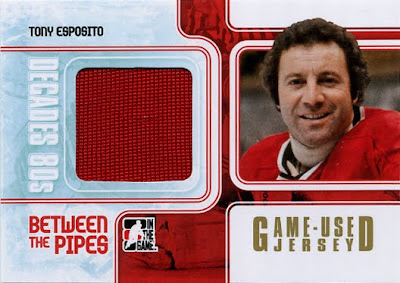 This Tony Esposito jersey is the Gold version (there are only 10 copies of this card). Too bad for the solid red swatch. 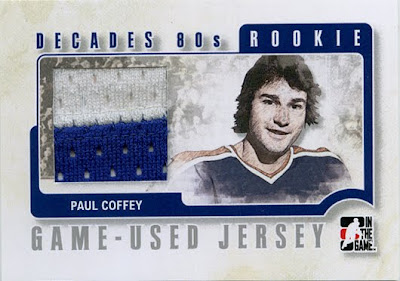 Like I mentioned....another subset. The seam on this bad boy is just bursting out. It's pretty cool if I do say so myself. And how could you not like a Coffey jersey from his heyday in Edmonton? 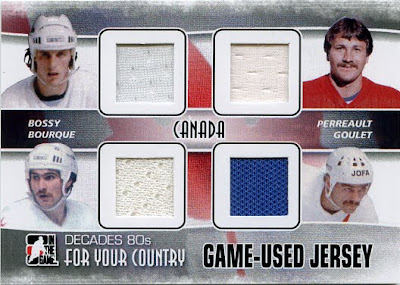 Quads! In four boxes of the product, I hit four quads. I really like these too.

The player selection on the Canada quad is not what one would normally see. Blue for the Goulet? Sadly, they had to use a Nordiques jersey. Sadly I say...am I crazy? 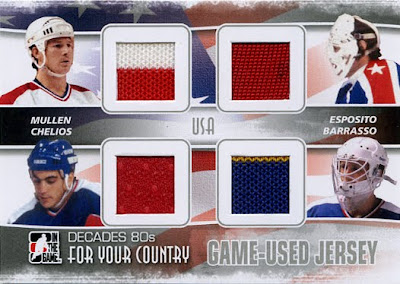 The USA quad is equally as eclectic in player selection. Barrasso and Esposito on the same card. Wait! Tony Esposito in a USA jersey? What gives?

We all remember him as part of Team Canada in 1972 and he represented Canada numerous times. But in 1981 he became a naturalized US citizen and played for the States in that year's Canada Cup. 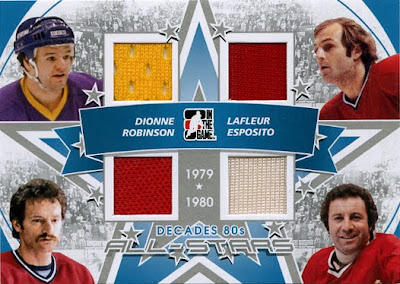 All-Stars from the 80's. I always liked the All-Star cards in the various O-Pee-Chee products back then. I remember getting a Don Edwards or Danny Gare and thinking "Who are you?" Other years, it would be Oiler stacked.

This four pack of players fire off a fine wallop. 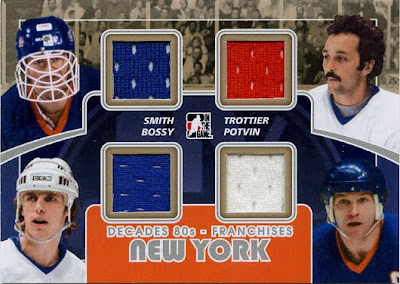 But my favorite quad in the bunch is this Islanders card. These are the four that I remember most from those early days of card collecting. They were at the pinnacle of the sport when I was introduced to hockey cards. Man, those were the days.

Look at the photos they used. Right from that era. Points for that. 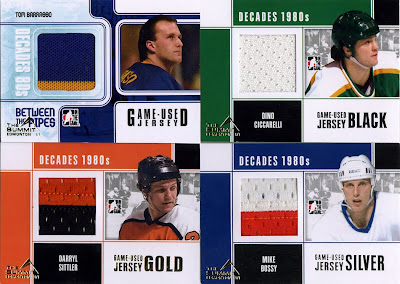 Lastly, the showcards that I received from ITG for opening my boxes at their booth. One card per box. Completely random (bummer). Not bad. A couple of the cards have that wildly popular seam burst going on. And with them being 1/1's, there might be a bit of a demand if the right collector comes along.

I've seen a Linden Emblem show card 1/1 go for well over $100 on ebay already. And these cards were given out for free.

Overall, I really like this product. Player after player...memory after memory. By essentially eliminating the base cards, one can get right to the goods. That said, I wouldn't have minded some base cards from that era. Would have been neat to see some old school collecting going on.