Well, it's official. These Panini Playoff Contenders Draft Tandems cards are the worst scanning cards I have ever seen.

One Linden added to the collection during my holidays and it's got a couple neat aspects to it. 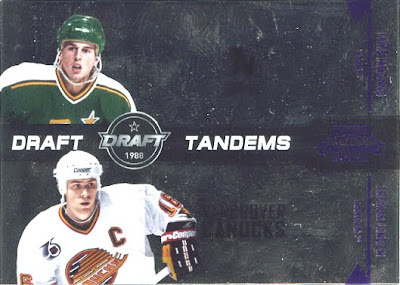 This card is one of three parallels to the Draft Tandems base card (I'm still looking for the green /50 and the autos /25). The text on the front is in all purple (although you can barely tell).

The back of the card is what I really wanted to focus on. 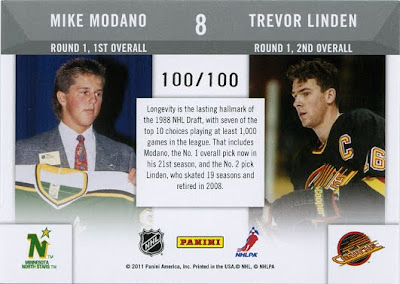 First of all, take a look at that baby-faced, brush-cut number one draft pick. That photo of Modano is worth the price of the card right there.

Unfortunately, the Linden half couldn't equal the stand. Shame, since he donned the glorious yellow skate jersey the Canucks recently went to. 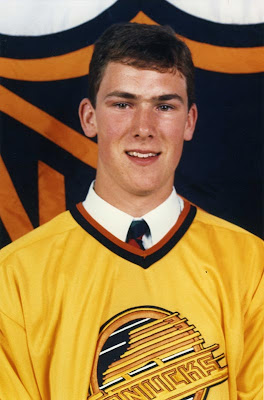 Nice to see Trevor got the pre-draft haircut as well. Hilarious.....yet awesome.

The other neat thing about this card is that it is serial numbered 100/100. That makes it some sort of uber-rare 1/1 right? It's worth a bazillion times more since it has this particular serial number.

The fact that this card has the final creation serial number makes zero impact on me and I refuse to pay a premium for such nonsense when presented as a '1/1' card.

It's cool, but not that cool.

if it were numbered to Trev's jersey number (16/100), that might make me pay a very marginal premium (I said might....and very marginal) but I am not one who is stuck on serial numbers (unless you're talking about my 1 vs. 100 project).

A cool addition to the PC and another one off the Linden list.
Posted by bamlinden at 9:17 PM