BEHIND THE MASKS - More Inspiration

I just returned last night from my yearly golf trip with buddies of mine from high school as well as my brother-in-law. The last 5 years, we have ventured out to B.C. for the 'tour', but this year decided to travel down south to Montana.

While the weather was hotter than here in town, my golf game was not. Still, it was a ton of fun and the days went far too fast.

I returned to find a number of bubble envelopes in my mailbox which included a pair of mask cards from the Inspired Masks set. 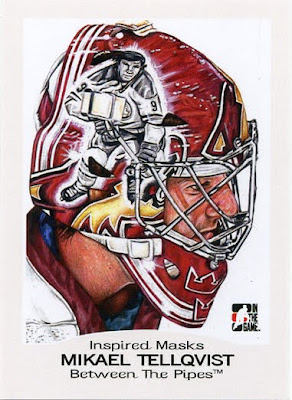 This mask came from Tellqvist's time as a Phoenix Coyote. It shares as both a tribute to the Winnipeg Jets era as well as his Swedish roots.

On the one side (shown) is HOFer Bobby Hull while the other side has Swedish native Thomas Steen. I actually found the photo that this artist rendering came from. A very nice depiction.

The second card come from a goalie who wore one of my favorite masks from a few years ago. Wade was the New York Islanders' main backup in 2007 and wore a mask that paid tribute to the glory years of the franchise.

On one side (shown) is a great moment in Isles history...Bob Nystrom scoring the overtime Stanley Cup winner against Philadelphia in 1980 (poor Mel Bridgeman). The other side of the mask shows Denis Potvin raising the Cup over his head. 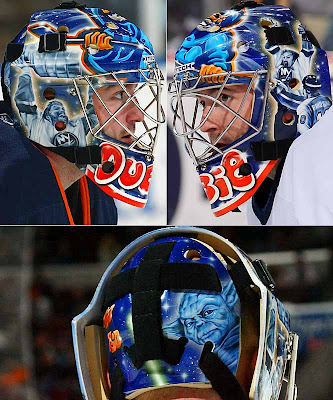 While the front forehead area of the mask brought fans back to the much-maligned fisherman logo, it was the backplate that I got a kick out of.

Any mask with Yoda on it gets some cool points......right?