RAISE THE CUP - Digging Through The Collection

I've made a point of going through some of my cards during my time off from work. Better organization of my traders, updating the wantlists and properly packing away more of the collection that I plan on one day trading or selling.

Sifting through some of my cards, I came across these three gems to be added to the Raise The Cup project (including one of my favorite cards as a kid). 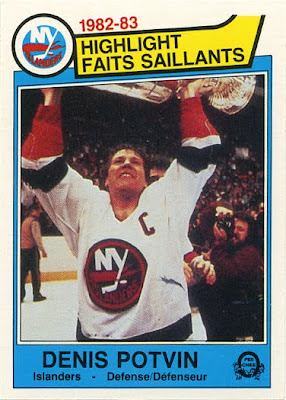 I think this card defines what a 'highlight' or 'in action' card should be. It captures a specific and important moment in the team's season and this photo is the biggest moment of the campaign.

Potvin hoisting the Cup in 1983 (his fourth in a row) is a great photo. I wish I could see a little more of the Cup in the shot, but that's a minor beef. Denis looks to have a bunch of different emotions on his face. Relief, exhaustion, satisfaction, just to name a few.

It's a shame more cards aren't like this nowadays. 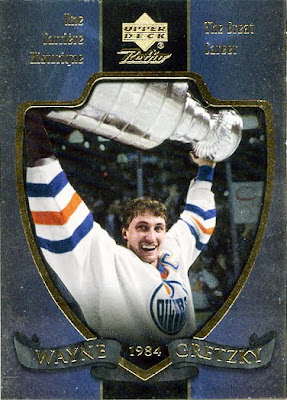 While 1983 might have been New York's year, it was Edmonton who gave notice that they were the team of the future. And in 1984, they realized their dream.

Wayne Gretzky and crew won their first Stanley Cup in convincing fashion and began their own dynasty. This card from 1999 pays tribute to that moment.

A five-card insert set to the McDonald's release that year celebrates the great career of The Great One. 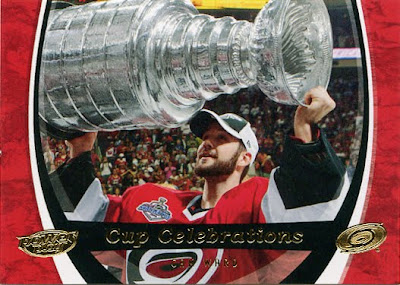 The final card in this showing is from an insert set that I'm slowly knocking off the wantlist.

The Cup Celebrations cards are a great concept....guys winning the Stanley Cup.

In fact, the more I think about it, I'd like to see a full set called 'Raise The Cup'. It'd be cool to see a uniformly designed set celebrating these great moments where players finally find that mountain peak by raising the cherished Cup over their head.

Current collection - 43 cards
Posted by bamlinden at 11:14 AM