TO THE BIKE SPOKES!!! - Tom Kurvers

What makes a great 'In Action' photo? Is it the feeling of fury or energy in the shot? Is it the capturing of 'the moment' right before or during a great scoring opportunity? Does the emitting of emotion or drive help the shot?

Well, this photo could then be considered an 'action' shot... 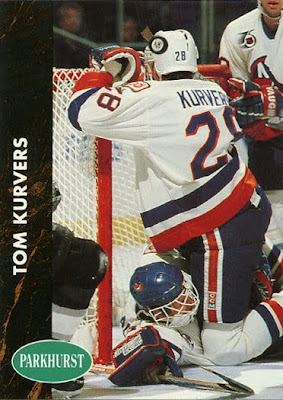 There's a lot going on in this photo, so let's break it down.

There's no less than three Islanders in this photo. All of whom are seemingly fixated on something other than the puck. There also is a cameo from a Los Angeles Kings' knee.

Kurvers, the focus of the card, seems to have neglected the fact that the camera is on his left side and not the right.

Poor Glenn Healy. He is the lucky recipient of a Kurvers groin in the goalmouth. And Kurvers himself seems to be kissing some crossbar. The guy in the background seems ready to knock the goal off its moorings at a moment's notice.

All of this adds up to a very messy and unwanted 'action' shot.

While I can appreciate Parkhurst's attempt at improving the photography on its cardboard, I don't think this is what hobbyists had in mind.

And too bad for Kurvers...he was on a very limited number of hockey cards in his NHL career, it doesn't help when the backside of your jersey is the focus. I wonder what he says when kids come up to him to get this card signed?

I love how that puck just sits there (for an eternity) while everything else is going on.

Goal or no goal? Maybe the puck bounced in for the game winner.

To the debacle in the crease and the lack of photo quality control...