I'm sure you have all heard by now that 17-year NHL veteran Chris Osgood announced his retirement a couple weeks ago. But did you know that another NHL goalie also hung up the skates that same day.

Patrick Lalime might not have had the longevity or numbers like Osgood, but he pieced together a pretty decent career for himself between the pipes.

To me, he will always be remembered as the goalie who holds the NHL record for the longest unbeaten streak to start a career (16 games...14-0-2). He ended his playing days with a total of 200 wins - not too shabby if you ask me.

But his goalie masks rank right up there as some of the best from his era. 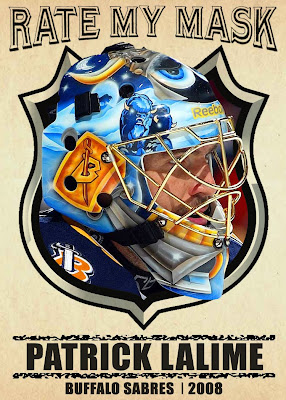 Today, I'll be taking a look at one of his lesser know mask designs. His days with the Buffalo Sabres limited him to the role of backup, but his lid was definitely first string.

One of the staples of a Lalime mask is the big-eyed Looney Tunes character 'Marvin the Martian'. I'll get to how he brought that character on in a minute. But first, let's take a closer look at this mask. 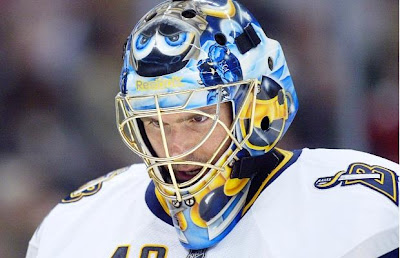 Numerous buffalo roaming in a winterscape dictate the background of the mask allowing the blue color palette to dominate. A sword and shield flow down the sides of the mask with the gold accents adding a punch to the blue.

To top it off (literally) is the infamous Marvin character, this time donning a viking-esque horned helmet. 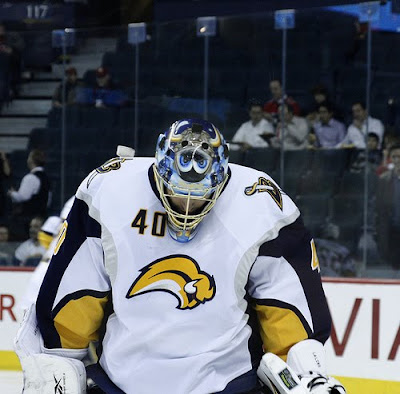 It's hard to miss those huge cartoon eyes on the top of Patrick's helmet. They have been a staple of his masks since his days as an Ottawa Senator. 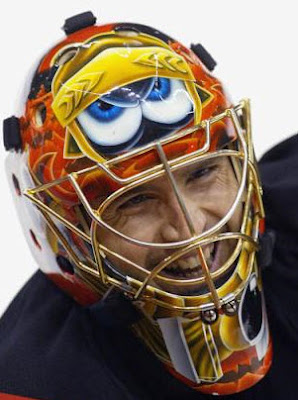 The use of Marvin was due to the fact that the character struck a similar look as the Senators logo. The look fit and when Lalime moved on to St. Louis, so did the Martian. 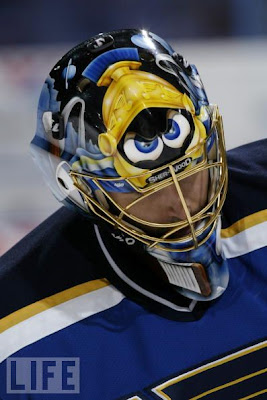 He kept the look of the cartoon exact say for the root color now being blue.

It wasn't until he went to Chicago that a little creative injection was made to the look of Marvin. 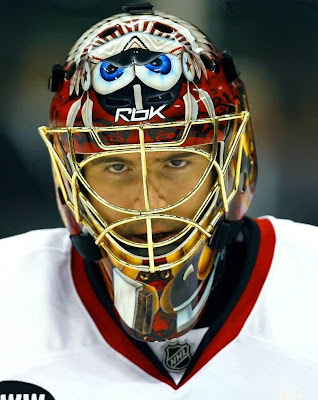 An Indian headdress was now adorned by the cartoon character, giving him a look and feel consistent to the Blackhawks' vibe.

Move forward to Buffalo and a helmet with Buffalo horns on it completed the look Marvin the Martian would have during his career as a mask moniker.

Now it's your turn to Rate My Mask!
Posted by bamlinden at 8:10 PM