A Saturday pickup from the post office is the star of this installment of the Linden Card Of The Week.

Another gorgeous patch from the 'Decades' release. 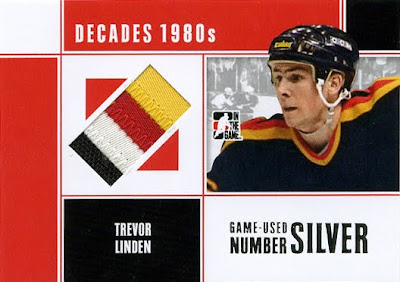 2010 In The Game Decades#M-62 Game Used Number Silver
Now, based on the insertion numbers posted on In The Game's website, there are only three of these cards out there. So when I first saw this one, I knew I would have to act quickly.

I saw this gem on one of the hobby boards I peruse regularly and at first I was a little off guard.

Someone had posted they had a sweet Linden card, but the photo that was attached to it was offline. I had no idea which card it was.

Regardless, I contacted the owner of the card and inquired - asking for a scan.

Upon seeing the scan, I quickly asked for an asking price. He said he was planning on putting it on ebay, but would listen to an offer.

Knowing what some of these cards have gone for in the past (and knowing what I have paid for cards from this set so far), I threw out what I thought was a respectable offer.

He agreed and the card made it into my hands today.

Definitely another upper tier Linden in the collection.

I'm going to have to take a closer look at the numbers, but I may have just recently surpassed the 1000 card mark for my Linden collection (that will make for a very cool photograph).
Posted by bamlinden at 12:34 AM