LINDEN CARD OF THE WEEK - Made To Order

The work week from 'H-E-double hockey sticks' is finally over!

What made things much more tolerable was that the weather was gorgeous here over the past week (between 25 and 30 degrees Celsius each day).

Now I can get back to some hockey card blogging....and hopefully a round of golf this week.

Here's a card that arrived a week ago. It's a beauty. 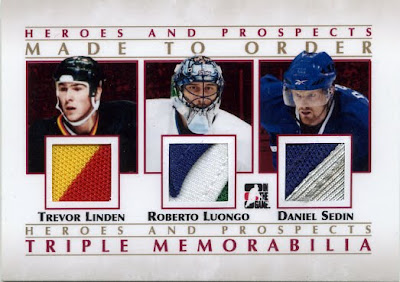 2010/11 In The Game
Heroes and Prospects
Made To Order Triple 1/1
I saw this card posted on a couple hobby boards a while back. Immediately, I was interested. I never knew Linden was an option on Made To Order cards.

For those who don't know what a Made To Order (or MTO) card is....it's when you receive a blank card in your pack (almost like a decoy card). You then go to the card producers' website and from a list of players, choose the card you want made. They design a unique one-of-a-kind card and mail it off to you.

To date, it's the only Trevor Linden Made To Order card in existence.

The person I bought it off of said they had the card made up because the players they wanted weren't available.....so the question of 'what's the best tradebait' was asked.

Linden and Canucks it was.

It got to a number that was a little more comfortable for me, so I inquired. I was told what the 'break even' number was for the other person. Even then it was a little higher than I was looking to go.

Eventually, I went for it and we finally came to an agreement. The card arrived and this is what I pulled out of the bubble envelope. 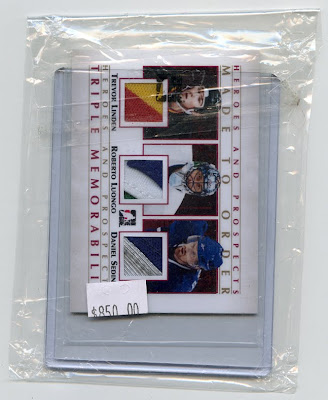 Now first off, let me say that the price on the tag was NOT the price I paid. I think it was the price the person was hoping to get.

Second, this is just a terrible job of securing and packaging. I would have hoped that a card that I spent a lot of money on would have been prepped a little better for travel (it came all the way from Sweden). 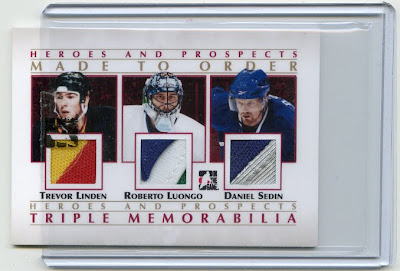 What was even more disappointing was that the seal on the In The Game toploader came apart (it was made and sealed by the card company). To me, I would like the card in the condition and protection that it was originally intended.

I asked if the seller would be willing to pay to have the card resealed (if In The Game does that). Cross your fingers. 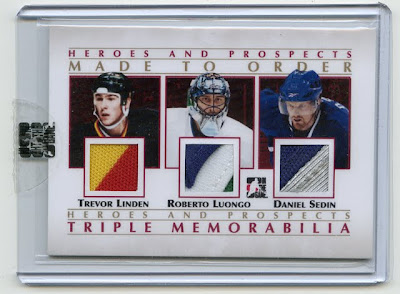 In the end, this card isn't even going to stay with me for very long. It will be heading off to another Linden collector. I hope to work something out for some nice stuff coming back my way.
Posted by bamlinden at 9:10 PM