BEHIND THE MASKS - One And Done

The third Wednesday of the month can only mean one thing. Trade night!

I tried my best to resist the urge to bust a box or two. I'm really leaning towards going to the Toronto Expo next month and wanted to save the case for that trip.

That didn't mean I walked out empty-handed.

I played a few rounds of pack wars (and lost them all). It sucks because there were some amazing pulls tonight, highlighted by a Parkhurst Champions Gretzky Printing Plate 1/1.

I made a few trades as well. One of which had stemmed from my Dominion break a month ago. 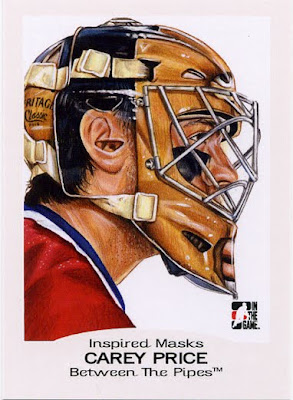 2010/11 In The Game
Between The Pipes
Inspired Masks
#IM-12 Carey Price
This is the fourth card to make into the collection from this eye-catching Inspired Masks set.

The mask Carey is wearing comes from the Heritage Classic played in Calgary last season. The design was inspired by the king of the goalie mask, Jacques Plante. 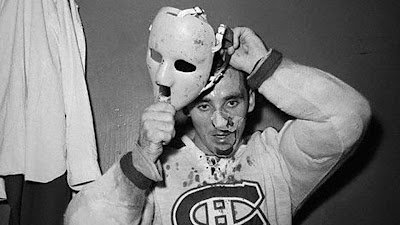 Crude and frightening, Plante was often taunted for wearing the mask. Most opponents called him 'chicken' for wearing protective head gear. I'm sure they would have been singing a different tune if they had a few hundred stitches in their face. 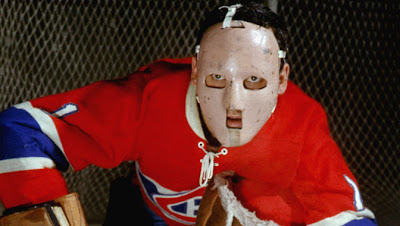 It might not look pretty, but it saved him countless times from suffering more broken bones. It also prolonged his career for many years. I'm sure that's why he became heavily involved in the production of goalie masks. 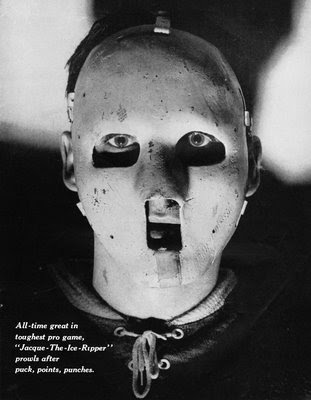 Back to the Price card. It's one of the more sought after cards in the set, so to add it to the collection for what I thought was more than a fair trade makes me even more happy.

What I love about the card is the seamless transition between the hair on the mask and Carey's hair. The ear placement is bang on where it should be. It really gives the illusion that he's donning an old school lid.

Stay tuned for the rest of my trade night pickups. There's a couple of tremendous pc pickups and some good ol' hobby generosity.

Fantastic stuff!
Posted by bamlinden at 1:05 AM